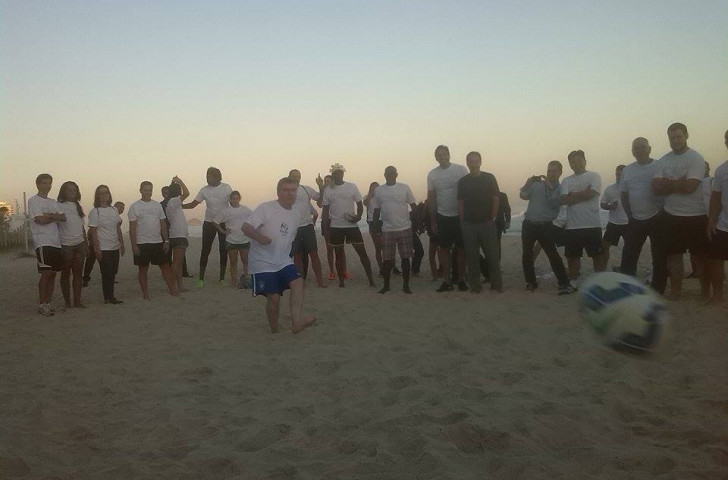 International Olympic Committee (IOC) President Thomas Bach has insisted Rio 2016 will achieve a "great legacy" when asked about pollution concerns on Guanabara Bay here on the eve of celebrations marking exactly one-year until the Opening Ceremony of the Olympic Games.

Speaking just an hour after arriving in the Brazilian city following a 24-hour journey from the IOC Session in Kuala Lumpur, Bach swapped his suit for a tee-shirt and flip-flops as he enjoyed a football kickaround with the likes of 1994 World Cup winner Jorginho and Barcelona 1992 and Athens 2004 Olympic volleyball champion Giovane Gávio.

After being presented with a custom-made Brazilian shirt bearing his name, the German was in typically enthusiastic mood as he showed off his skills before taking two penalties - the second of which was successful - while also being lifted for a mock-rugby lineout and paddling in the sea.

He insisted afterwards today marked the "perfect start" of a week of one-year-to-go celebrations before praising organisers as they begin the final 12 months of preparations.

Still-high levels of pollution at the Guanabara Bay sailing venue is widely seen as the biggest remaining challenge ahead of a test event later this month after the International Sailing Federation revealed plans to conduct its own independent testing for viruses in the waters.

Bach claimed that "what is important is ensuring it is safe for athletes", outlining that appropriate measures are being taken to ensure this is the case despite recent independent tests finding a "serious health risk" to athletes.

"For the Games we will have good conditions for the athletes at the competition venues," he said.

"The test events are showing that we are going in a good direction."

When challenged over whether Rio had failed in its wider legacy aim to reduce pollution levels by up to 80 per cent on the Bay, he insisted that these pledges had been partly met before praising success elsewhere which had gone beyond initial objectives.

This includes culture and education programmes as well as the regeneration of communities and improvements to transport infrastructure, it was explained.

Tomorrow, Bach will be a guest of honour at a special commemorative event held at the Cidade das Artes venue here in Barra da Tijuca, home to the main Olympic Park during the Games.

Brazilian President Dilma Rousseff is set to attend alongside Rio State Governor Luiz Fernando Pezão and the city's Mayor Eduardo Paes along with a host of leading Brazilian sporting stars.

The event will be headlined by a concert organised by Celebrate, the Rio 2016 Cultural Programme, with nine songs to be performed all "telling the story" of the host city.

Ahead of the start of the much anticipated sailing test event on August 15, two other test events begin over the next two days in the sports of rowing and equestrian.

Held on the Lagoa Rodrigo de Freitas, another venue that has faced criticism for pollution, the rowing competition starting tomorrow will double as the World Junior Championships.

On Thursday (August 6) the Aquece Rio International Horse Trials is then set to begin at the Olympic Equestrian Centre in Deodoro.

Celebrations continue over the weekend before the latest Coordination Commission inspection visit, chaired by El Moutawakel, begins on Monday (August 10).