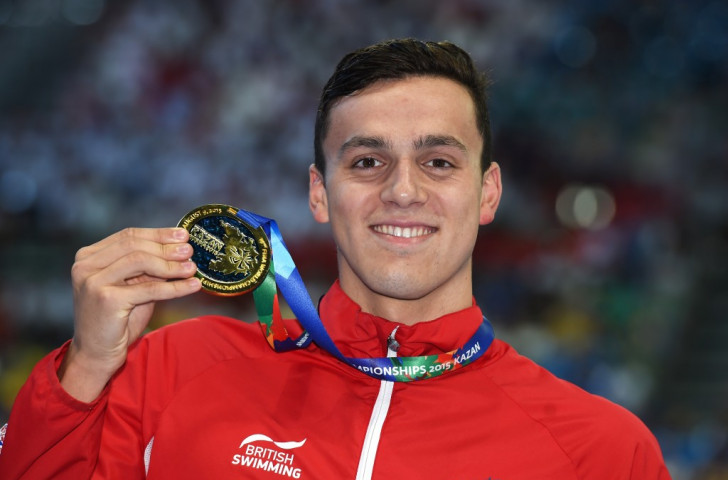 Britain’s James Guy produced a stunning performance to shock the field in the men’s 200 metres freestyle as he claimed victory at the International Swimming Federation (FINA) World Aquatics Championships in Kazan.

In a thrilling race, the 19-year-old edged out Olympic silver medallist Sun Yang of China by a narrow margin of six hundredths of a second to claim gold in a time of 1min 45.14secs, while world record holder, Germany's Paul Biedermann, had to settle for bronze.

Guy, the silver medallist behind Sun in the 400m freestyle on Sunday (August 2), was third at the turn but managed to touch the wall ahead of his rival to seal a memorable evening for the youngster.

“I never thought I'd race Ryan Lochte head to head like that - he is one of my heroes,” he said.

“So to race him was amazing and to touch my hand on the wall first and be world champion hasn't sunk in quite yet.

“Coming in, I didn't think that I would make the final of the 200m, but I knew I had done some good sessions out in Majorca and back at home.”

It proved to be a successful day for the British swimmers as 100m breaststroke gold medallist Adam Peaty set a world record of 26.42 in the 50m breaststroke semi-finals.

Elsewhere on another packed evening, where six gold medals were decided in total, American star Katie Ledecky secured her second victory in three days thanks to a world record time of 15:25.48 in the women’s 1500m freestyle.

The 18-year-old from Maryland, who reigned supreme in the women's 400m freestyle, was the strong favourite in the race and managed to live up to expectations, touching the wall comfortably ahead of Lauren Boyle of The Netherlands and Hungarian Boglarka Kapas.

Her time was 2.23 seconds quicker than her previous mark she had set during the heats yesterday as she swam clear of the field to claim another world crown.

The 100m backstroke events yielded double gold for Australia as Emily Seebohm led a one-two from her country in the women’s race in a time of 58.26sec, with compatriot Madison Wilson coming through to clinch silver and Mie Nielsen of Denmark bronze.

Seebohm’s triumph was then replicated by fellow Australian Mitch Larkin, who sealed gold in the men’s race in 52.40.

France's Camille Lacourt, the 2011 world champion, was 0.08 further back as he won silver, while American Matt Grevers, the defending champion, was third.

In the final event of another dramatic evening, Russia’s Yuliya Yefimova returned from a 16-month doping ban to top the podium in the women’s 100m breaststroke in 1:05.66 which saw her win gold in her first appearance since her suspension.

Earlier on, there was more success for the United States as Rachelle Simpson claimed her first-ever world title with victory in the women’s 20m high diving event with a total of 258.70 points.