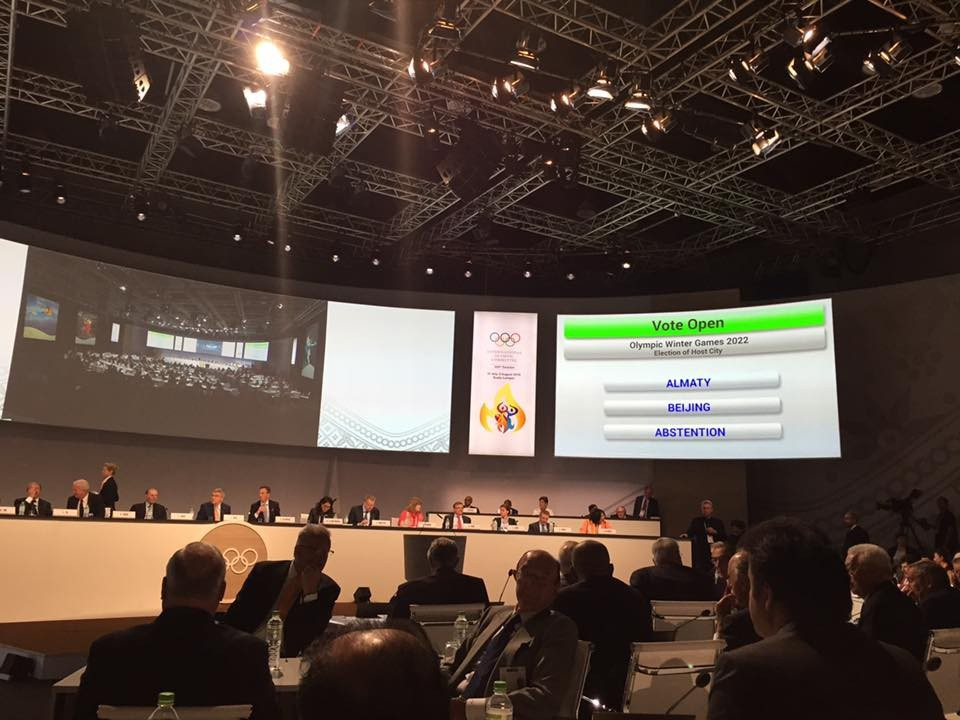 All remaining votes in the 128th International Olympic Committee (IOC) Session in Kuala Lumpur are to be conducted the old-fashioned way, via paper ballot, after yesterday's fiasco which forced a re-vote in the battle between victors Beijing and Almaty for the right to stage the 2022 Winter Olympic and Paralympic Games.

Problems with the “integrity” of the IOC’s new electronic voting system forced IOC President Thomas Bach to order a switch to Plan B, after which the red hot Chinese favourites were declared the winners by 44 votes to 40.

The highly embarrassing malfunction led to rumours sweeping the Malaysian capital’s luxury hotel bars on Friday night to the effect that the original vote had been tied.

A trusted IOC source today told insidethegames, however, that Beijing had won both votes.

Questioned on the electoral farce at the end of today’s Session proceedings, Mark Adams, IOC communications director, explained that in an earlier vote between Lausanne and Brașov for the right to stage the 2020 Winter Youth Olympics, “there were one or two devices handed back.

“There was some kind of issue,” Adams said.

“I’m not quite sure what it was.

“In the second vote, I think we got to something like 11 devices handed back and at that point, my understanding is that the scrutineers went to the President and said that we need to re-vote…

“My understanding is that there were problems with the frequency…

“But…the vote was a good and verified vote.

“The issues are issues for the IOC.

“We need to make sure we sort those out.”

Asked whether both electronic and paper ballots yielded the same result, Adams replied: “We have an independent company - Det Norske Veritas (DNV) - who audit the results and equipment of a number of international organisations.

“Inasfar as they are completely happy with the results, yes the results are fine.

“Certainly, in regards to the Beijing vote, it was a paper vote.

“It was a paper vote verified by them and by the scrutineers and was 44-40.”

In a prediction that has proved woefully wide of the mark - at least for now - insidethegames wrote that the new system “should represent a good promotional opportunity for the IOC’s TOP sponsor Samsung, which supplies the IOC with wireless communications and computing equipment under the terms of its deal”.

insidethegames further wrote that the timing of the new system’s introduction hinged on “an independent validation process to ensure it is foolproof and completely secure”.

The decision to move to paper ballots for the remainder of the Session means that Monday’s elections of both new IOC members and a new member of the IOC’s Executive Board will be conducted the traditional way.

Today's landmark election of the nine members of the newly-composed IOC Ethics Commission took the form similarly of a paper vote.