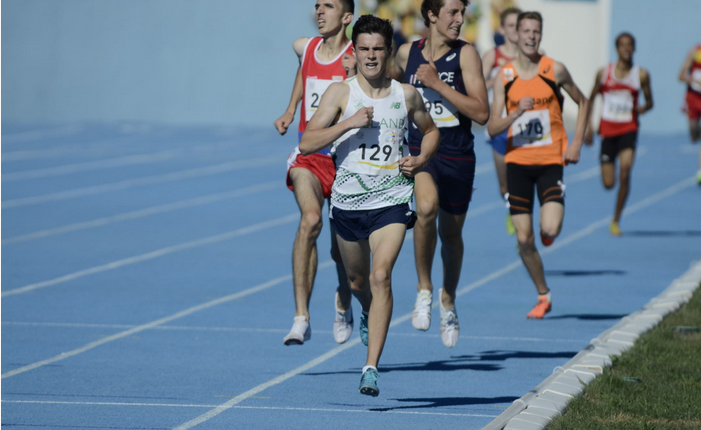 Larsson posted a time of 10.72sec and was swiftly followed across the line by Finland’s Lauri Tuomilehto, 0.01 seconds behind, while the bronze went to Spain’s Pol Retamal Avila.

Neville crossed the line in 12.01 to finish ahead of Poland’s Klaudia Natalia Adamek and Norway’s Ingvild Meinseth, silver and bronze medallists respectively.

Also in athletics, Serbia’s Elzan Bibic came out on top in the boy’s 3,000m event, covering the distance in 8mim 50.10sec.

In the equivalent girl’s event, The Netherlands’ Diane van Es claimed victory with a time of 9:58.49 as Serbia’s Tamara Micevic had to settle for second, followed by Belgium’s Justine Norbert Tinck in third.

Meanwhile in swimming, Moldova’s Alexei Sancov followed up his success in yesterday’s boy’s 200m freestyle to win gold in the 400m freestyle with a time of 3:53.42.

Valle’s compatriot Hugo Gonzalez de Oliveira went one better for Spain in the boy’s 100m backstroke, clocking a time of 55.87 to win ahead of Ireland’s Conor Ferguson in second and Poland’s Kacper Stokowski in third.

A member of that winning team, Valeriya Egorova, lived up to her billing as favourite to win the girl’s 100m backstroke with a time of 1:03.93.

Russia had to settle for silver though in the boy’s 100m breaststroke with Daniil Kitov sandwiched between the winner, Nicolo Martinenghi of Italy, and bronze medallist, Tanguy Lesparre of France, on the podium.

Similarly in the boy’s 100m butterfly, Russia’s Egor Kuimov finished second to Estonia’s Kregor Zirk to claim silver along with Israel’s Tomer Frankel, who posted exactly the same time of 54.57.

In cycling, Denmark’s Julius Johansen Graungaard came away with the boy’s time trial title, while Switzerland’s Samuel Steiger Til won the silver and France’s Florentin Lecamus took the bronze.

In the equivalent girl’s event, Italy’s Elena Pirrone finished ahead of France’s Clara Copponi in second and Britain’s Lauren Dolan in third.

The first gold medal in gymnastics went to the Britain’s artistic boys’ team as the trio of Hamish Carter, Joe Fraser and Giarnni Regini-Moran gained 169.650 points to finish ahead of Italy in second and Russia in third.