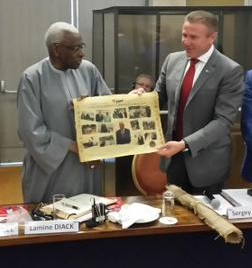 Sergey Bubka today vowed not to withdraw his bid to become President of the International Association of Athletics Federations (IAAF) even though two more countries today publicly promised to back his rival, Sebastian Coe.

Spain and The Netherlands both announced that they would be voting for the double Olympic 1500 metres gold medallist, meaning 14 European countries in two days have come out in support for the Briton.

The announcements followed earlier pledges from Germany, Jamaica and New Zealand to back Coe in the election to replace Lamine Diack, who is stepping down after 16 years, at the IAAF Congress in Beijing on August 19.

"Many thanks to those backing me for the IAAF Presidency. I'm very grateful for the support," Coe tweeted.

More countries are expected to come out next week and publicly say they are supporting Coe, the former chairman of London 2012.

He is due to travel to Pitesti in Romania tomorrow for the Balkan Championships on Saturday and Sunday (August 1 and 2) and then next week to the North American, Central American and Caribbean Athletics Association Championships in San José, Costa Rica, on August 7 to 9.

"I am not worried," Bubka, who is attending the 128th International Olympic Committee Session here, told insidethegames today.

"I too have plenty of support from members of the IAAF family.

"I have no intention of withdrawing."

The decision by Royal Spanish Athletic Federation to back Coe is particularly significant, however, as its President José Maria Odriozola has been a member of the IAAF's ruling Council since 1999 and is one of the most respected figures within the sport.

"Sebastian Coe is the right person for the International Association of Athletics Federations right now," Odriozola, who is standing to be treasurer of the IAAF, told Spanish newspaper Marca.

Royal Dutch Athletics Federation President Theo Hoex revealed that they were backing Coe because he is "so incredibly inspiring and so internationally oriented".

Hoex told Dutch newspaper De Telegraaf: "We believe he has the quality and the vision to give athletics a boost.

"We think that this sport needs it, especially now there is declining global interest.

"He can take athletics by the scruff of the neck and market it."