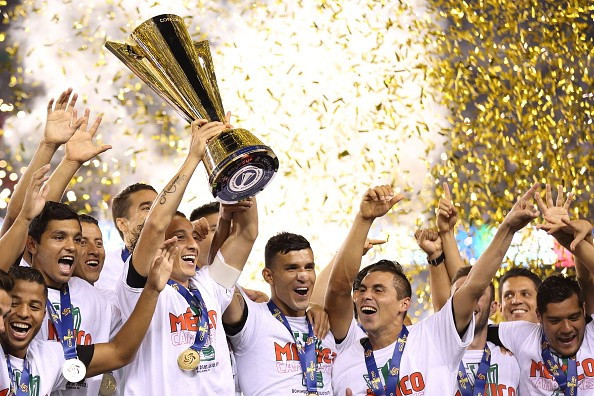 A sell-out crowd of 68,930 saw the Mexicans lift the trophy for the first time in the biennial tournament since 2011.

Jamaica, who had beaten the United States to reach the final, started well but fell behind after 30 minutes when Andrés Guardado, scored of three goals from penalties in Mexico's last two Gold Cup wins, put his side ahead with a left-footed volley.

Mexico doubled their advantage two minutes after half-time when Jesus Corona buried a shot into the bottom of Jamaica's net.

Then, in the 61st minute, Oribe Peralta collected a poor clearance by Jamaica's Michael Hector and tucked it away to give Mexico a 3-0 lead.

Substitute Darren Mattocks scored in the 80th minute to give Jamaica a consolation goal.

Mexico will now play America, the 2013 Gold Cup champions, in a play-off on October 9 to determine which team will represent Confederation of North, Central American and Caribbean Association Football at the 2017 Confederations Cup in Russia, a warm-up for the 2018 FIFA World Cup.

Earlier, Panama had beaten the US 3-2 on penalties to condemn the Americans to their worst Gold Cup performance for 15 years.

The US, still recovering from their stunning semi-final defeat to Jamaica, had fallen behind the 55th minute when Roberto Nurse put Panama ahead.

Clint Dempsey equalised for America 15 minutes only for Panama to come out on top in the penalty shoot-out when goalkeeper Luis Mejía saved an effort from US captain Michael Bradley.

Panama, though, were still upset by their controversial semi-final defeat on Wednesday (July 22) to Mexico when they were leading until their opponents were awarded a penalty in stoppage time.