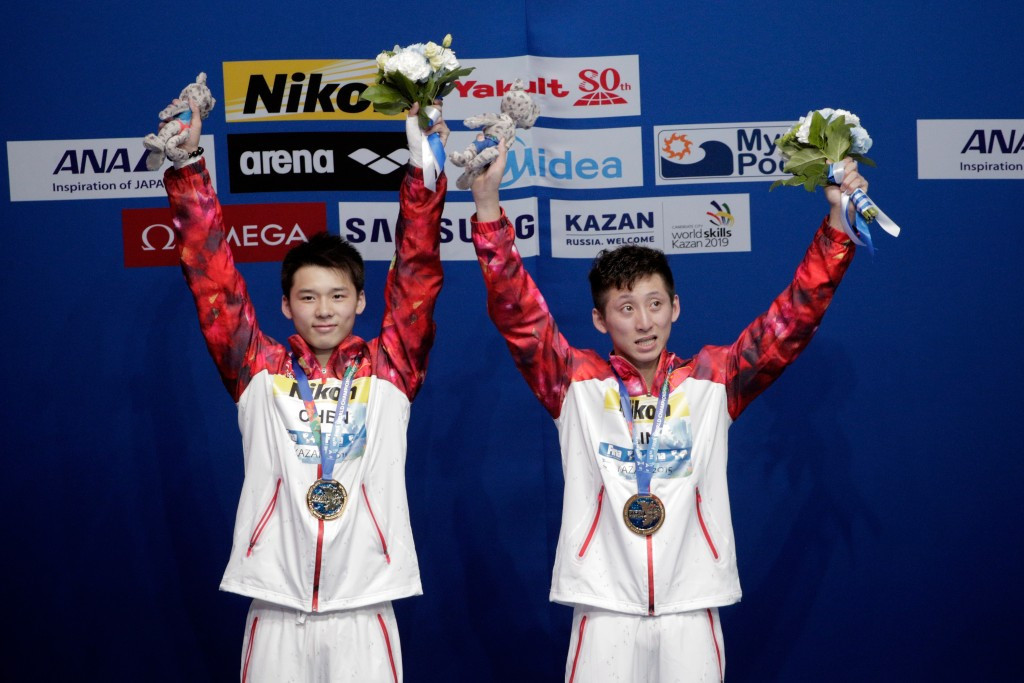 Having lost the title to Germany’s Sascha Klein and Patrick Hausding in Barcelona two years ago, Chen and Lin brought the world crown back to China with a total of 495.72 points.

The duo were never seriously challenged with second-placed Mexicans Ivan Garcia and German Sanchez well behind on 448.89, and Russian bronze medallists Roman Izmailov and Victor Minibaev ending with 441.33.

Defending champions Klein and Hausding had to settle for sixth spot this time round, finishing a place below the United States’ pairing of Olympic champion David Boudia and Steele Johnson.

"Our strength in this event is the synchronisation," said Lin.

"In fact our individual capability is not good enough but our synchronisation is perfect."

He added: "We didn’t have any pressure at all.

"Two years ago there was this other duo [Klein and Hausding] but we didn’t want to get revenge.

"We just tried our best."

America's Bill May and Christina Jones came out on top as mixed duet synchronised swimming made its debut appearance on the World Championships programme.

May and Jones justified their billing as pre-competition favourites, registering a winning total of 88.5108, ahead of Russia’s Alexandr Maltsev and Darina Valitova with 88.2986 and Italy’s Manila Flamini and Giorgio Minisini with 86.3640.

May is 36-years-old and was the most experienced male synchronised swimmer in the field.

He considered the pioneer of this discipline, having taken part in his first international competition - the Goodwill Games in 1998 where him and his partner Kristina Lum competed with "ordinary" duets and lost only to Russia's Maria Kiseleva and Olga Brusnikina.

May had left sport 10 years for the Cirque du Soleil show but returned when mixed duet synchronised swimming was added to these Championships.

There was also success on home soil for Russia as Natalia Ishchenko and Svetlana Romashina captured the duet synchronised swimming gold medal.

"FINA is constantly innovating and strongly believes that these Championships here in Kazan will improve the number of cumulative TV viewers in Barcelona 2013, already an outstanding figure of 4.5 billion," he said.

"Before the start of the competition, FINA was already proud to announce a record: 189 countries are taking part in this event, a number that largely improves the previous maximum of 178 National Federations present in Shanghai 2011 World Championships."

Vladimir Leonov, Minister of Sport of the Republic of Tatarstan, has expressed his delight with the running of the event so far.

"I have heard a lot of feedback from the delegations that are already present in Kazan, and I must say that it is very positive," he said.

"The atmosphere in the [Athletes’] Village is fantastic and the people of Kazan is responding very well to the appeal of the Championships, with, at this time, more than 60 per cent of the tickets available for the event already sold."