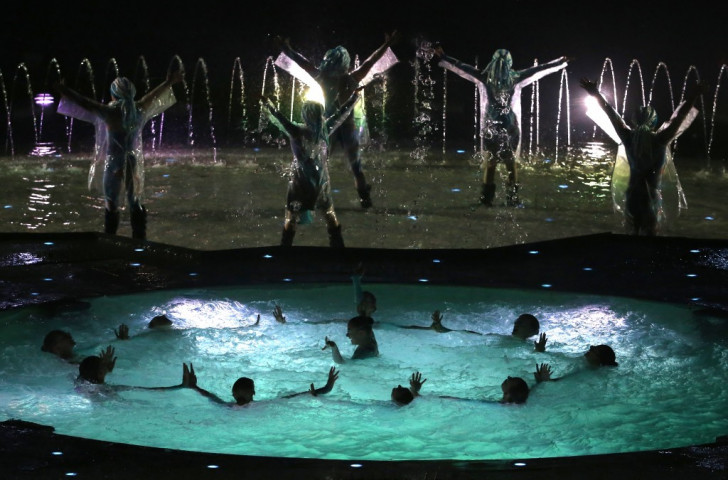 Russian President Vladimir Putin was in attendance in Kazan this evening as the International Swimming Federation (FINA) World Championships was officially launched with an Opening Ceremony at the Tatneft Arena Sports Palace to set into motion 17 days of sporting action.

For the first time, the two-and-a-half-hour long ceremony took place partly in a swimming pool itself, with local swimming star Nikita Kovalev emerging from the centre of a pool to star proceedings.

Water was unsurprisingly the central theme throughout, as around 200 circus performers, ballet dancers and professional athletes performed in a cascade of pools of between three and five metres deep.

Putin, who had earlier met members of the Russian water polo team, attended alongside FINA President Julio Maglione, who was at his second such event of the month after arriving from the Pan American Games in Toronto.

"Our country is hosting such a tournament for the first time and we aim to hold it at the highest level," declared Putin when opening proceedings.

"And let the strongest get the medals!

"But I'm sure the atmosphere of the championship, the spirit of fair competition, partnership and mutual respect will forever stay with each of you."

Action will begin in the Russian city tomorrow with competition in three of the six disciplines being contested at the biennial event: synchronised swimming, diving and open water swimming.

Medals will be won in the men's 10 metres platform and women's 3m springboard synchronised diving events, where China will be looking to continue their domination, as well as in the men and women's five kilometre open water swimming.

Defending champions Oussama Mellouli of Tunisia and Haley Anderson of the US will be among the favourites in the latter races although Russia's Evgeni Drattsev will also have his sights set on the first home gold of the Games in the men's event.

Day one should also be noteworthy for the World Championship debut of male synchronised swimmers, with technical performances due to be held in the mixed duet events as well as in women's solo and team formats.

Water polo action will then begin on Saturday (July 26) before high diving and swimming events begin later in the Games.

The swimming event is noteworthy for the number of high-level absentees which, as well as 18-time Olympic champion Michael Phelps, includes the likes of Austrialia's James Magnussen, France's Yannick Agnel and South Korea's Park Tae-hwan in the freestyle events.

While Magnussen is injured and Agnel is ill, Phelps was banned from the Championships as part of his punishment by USA Swimming for a second drink driving arrest last year, while Park is currently serving an 18-month ban after failing a doping test for Nebido, a testosterone which he claims he was injected with by a doctor without his knowledge. .

China’s Sun Yang is returning from a doping ban served last year to head the freestyle entries, while US stars Katie Ledecky and Missy Franklin are among the other biggest names competing.