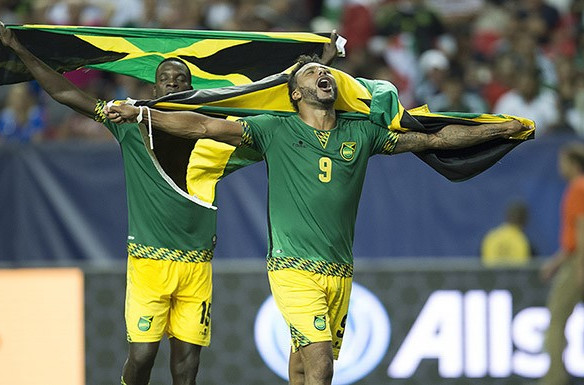 United States have failed to reach the final of the Gold Cup for the first time in six editions after a shock loss to Jamaica today in Atlanta before Mexico overcame Panama in a highly controversial second semi-final.

Despite plenty of anticipation beforehand, most observers expected the first match to be a foregone conclusion, with the Americans having only lost once to the Jamaicans in 22 encounters.

But from the outset the Caribbean side were disciplined and well organised, starving their opponents time in their half while looking dangerous whenever they advanced forwards.

The US still enjoyed the best of the early chances, with Aron Johannsson missing one opportunity before being denied by a spectacular save from Ryan Thompson after the goalkeeper had gifted him possession.

But then Jamaica struck.

First Darren Mattocks evaded his marker to connect to a long thrown with a superb backwards header over Brad Guzan, which deflected off two posts before rolling despairingly into the net.

Soon after Guzan, an English Premier League star for Aston Villa, was ruled to have thrown the ball from outside of the penalty area, allowing Giles Barnes to find the net from an exquisite angle to double the lead.

Despite going into half-time two goals down, the US always still seemed in the match and just needed one goal to regain a foothold.

This came when Johansson swivelled superbly before shooting from the edge of the box and, after a scrap for possession, Bradley drove home the rebound.

But as much as they poured forwards the second would not come as Thompson produced a string of saves amid a mass of other American near misses.

It had seemed at one stage as if they would face fellow giantkillers Panama in the final, only for a controversial ending to this evening's second match.

Panama's Roman Torres, who had converted from a corner in the 57th minute to give his side the lead, was ruled to have handballed in the penalty area after falling on the ball in injury time.

After a mass argument between both sets of teams and the referee in chaotic scenes which also saw items thrown onto the pitch, Andres Guardado scored from the penalty spot to take the game to extra time.

He then scored a second, and a second penalty, after Panamanian defender Harold Cummings fouled Javier Orozco to keep his team on course for their third win in the last four editions.