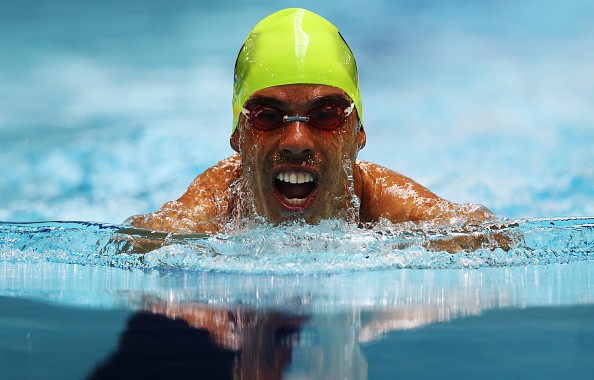 Russia finished top of the medals table as the International Paralympic Committee (IPC) Swimming World Championships drew to a close at the Tollcross International Swimming Centre in Glasgow tonight but there was no doubt the individual star of the event was Brazil's Daniel Dias.

Dias won his seventh gold medal of the Championships which, if he were a country, would have put him in the top ten overall.

It was a hugely encouraging performance for the 27-year-old Dias a year before he is set to be one of the faces of next year's Paralympic Games in Rio de Janeiro.

Dias' win in the men's S5 100 metres freestyle tonight was Dias' 24th World Championships gold and completed a full-house of titles across all seven days of competition in the Scottish city.

As well as leaving Glasgow as the most decorated athlete, Dias also added a Championships record with a time of 1min 08.85sec.

There were another four world records set on the final day of competition, to bring the total number to 38.

Belarusian Ihar Boki made a good claim to have had a successful Championships as Dias, setting his fifth world record and winning his sixth gold medal, clocking 54.44sec in the S13 100m butterfly to finish ahead of Russia's Roman Makarov and Australia's Timothy Antalfy and Azerbaijan's Dzmitry Salei, who tied for the bronze medal.

The 21-year now has won a total of 16 World Championships titles to go along with the five Paralympic gold medals he claimed at London 2012.

Ukraine's Yelyzaveta Mereshko broke the women's S6 100m freestyle twice in one day, setting a new mark in the heats and then lowering it to 1:12.21 in the final.

It was Mereshko's third gold medal of the competition, with team-mate Viktoriia Savtsova taking silver.

Australian Tiffany Thomas Kane set a new Oceania record of 1:15.05, also for a second time in less than 12 hours, to take bronze.

The world record was also broken twice in the S14 100m backstroke.

First, South Korea's Inkook Lee swam 59.88 in the heats before Russia's Viacheslav Emeliantsev lowered it to 59.26 in the final.

Lee had to settle for the silver medal ahead of Dutch swimmer Marc Evers.

Britain's Tully Kearney pulled away from the rest of the field to win gold in the women's SM9  200m individual medley in a European record time of 2:31.08.

The mark was the 18-year-old's second of the day, and brought her gold medal total to three.

China's Ping Lin swam to a new Asian record of 2:38.91 for the silver medal ahead of Ireland's Ellen Keane.

"I didn't even do my make-up!" said Applegate.

"I wasn't even meant to get onto the podium! I can't believe this has happened - I'm not even a backstroker! It means everything to me."

Kearney won a second gold medal of the evening - and fourth overall - as part of the British 4x100m medley relay 34 points that retained the title they had won in Montreal two years.

The team of Alice Tai, Claire Cashmore,  Kearney and Susannah Rodgers swam 4:52.89 to finish ahead of Australia, who clocked an Oceania record of 4:53.88 and Russia.

Three gold medals on the final evening lifted Britain to fifth on the overall medals table.

But Russia were the dominant nation, winning a total of 71 medals, 32 of them gold, including six on this final evening.

Denis Tarasov further contributed to Russia's first place finish in the medals table with a win and Championships record of 25.34 in the men's S8 50m freestyle S8.

Darya Stukalova took her second gold of the Championships in the women's S13 100m butterfly in 1:04.13.

The United States' Rebecca Meyers time of 1:05.03 took more than a second off the 20-year-old S12 world record to take silver.

Russia replaced Ukraine, who had finished top of the medals table at Eindhoven in 2010 and Montreal in 2013, as the most successful country at the Championships.

They finished with a total of 63 medals, including 21 gold.

Two came on this final evening.

The US finished third overall, winning 30 medals with 11 gold, 11 silver and eight bronze.

They finished ahead of the Dias-inspired Brazil, who also won 11 gold medals in their total of 23, which included eight silver and four bronze.

China finished sixth in the medals table, winning two gold medals in the last session to take their overall total to 29, made up of 10 gold, 11 silver and eight bronze.

Yang's team-mate Guizhi Li set a Championship record of 31.18 on her way to gold in the women's S11 50m freestyle.

New Zealand's Mary Fisher, the 2013 world champion, had to settle for silver and Sweden's Maja Reichard took the bronze.

Japan's Keichi Kimura set a Championships best of 1:02.98 to take his second gold medal of the week in the men's S11 100m butterfly.

Spain did have a gold medal to celebrate as Paralympic champion Teresa Perales won the women's S5 100m freestyle in 1:21.77

There was an Australian one-two in the women's S8 50m freestyle, with defending champion Maddison Elliott taking her fourth gold of the Championships, clocking 30.52.

Italy's Federico Morlacchi had a terrific duel in the SM9 200m individual with Russia's Andrei Kalina, coming out on top by less than a second in 2:17.76.