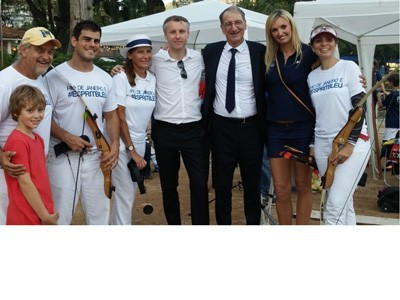 Masseglia was accompanied by volleyball player Victoria Ravva and equestrian Olympic champion Pierre Durand on Tuesday (July 14) at the venue where athletes will celebrate their Rio 2016 victories with the French community.

Messaglia said Club France is set to welcome top French chefs, as well as French and Brazilian musicians, and may also be used to organise fashion shows.

It will also act as an important meeting place for French officials hoping to promote Paris' bid to host the 2024 Olympics and Paralympics.

"We are here to speak first about [the] 2016 Olympics - to respect the timeline," said Durand, an individual jumping gold medallist at Seoul 1988.

"But as Paris is a candidate for 2024, nothing is insignificant."

The Sociedade Hípica Brasileira is Rio de Janeiro's oldest equestrian club and was founded in 1938.

French and Brazilians athletes participated in the celebrations organised by the Consulate General of France and the French-Brazilian Chamber of Commerce in Rio.

More than 300 children from Rio's 13 cariocas associations took part throughout the afternoon in the sports of handball, volleyball, judo, tennis, bowls, rugby or archery.

The iconic statue Christ the Redeeme,  overlooking the bay of Rio from Corcovado hill, was lit up in the evening, alternating between the red, white and blue of the French flag.

French President François Hollande called on the country’s top athletes to act as ambassadors for Paris 2024, as the French capital used Bastille Day to act as a send-off for its latest Olympic and Paralympic bid.

The winner is set to be chosen by International Olympic Committee members in 2017, at the body’s 130th Session in the Peruvian capital of Lima.

The French capital’s rivals at present are Boston, Budapest, Hamburg and Rome.