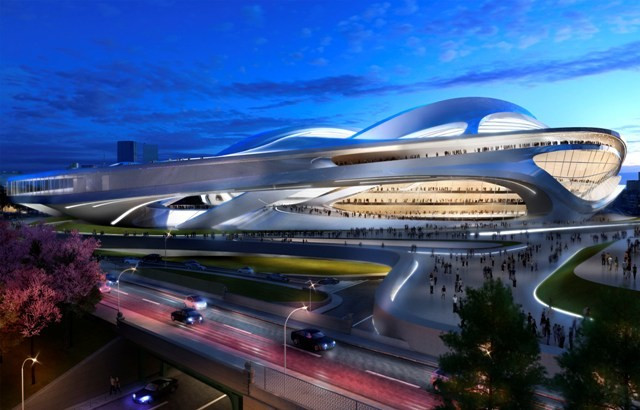 Japan's Prime Minister Shinzō Abe today announced that the plans for the controversial new Zaha Hadid-designed Natioal Stadium being built for the 2020 Olympics and Paralympics in Tokyo will be revised.

It follows mounting controversy in Japan after it was revealed last month that the cost of the new Stadium had risen to ¥252 billion (£1.3 billion/$2 billion/€1.8 billion).

"We have decided to go back to the start on the Tokyo Olympics-Paralympics Stadium plan, and start over from zero," Abe told reporters after meeting Tokyo 2020 President Yoshirō Mori.

"I have been listening to the voices of the people for about a month now, thinking about the possibility of a review."

Abe claimed that that he had been assured that the new arena, which is being built on the site of the Stadium which hosted the 1964 Olympics, will still be completed in time.

It means that the Stadium will now, however, not be ready in time to host the final of the 2019 Rugby World Cup, which Japan is also hosting.

"We have looked at the logistics and construction period and I have made this decision because I was assured that we can definitely complete construction on time," he said.

“Unfortunately we cannot build the Stadium in time for the rugby World Cup,

“But there is no change to our position that the Government remains fully committed to supporting the tournament.”

The Nissan Stadium in Yokohama, which hosted the 2002 FIFA World Cup final, is expected to host the final instead.

Mori, a former Prime Minister himself, has been put in charge of drawing up a timetable to choose a new plan for the Stadium.

Mori had been among the Stadium's critics.

“It looks like an oyster,” Mori said on a television last night.

Japanese Government sources told insidethegames that Abe had set a ceiling of ¥180 billion (£928 million/$1.4 billion/€1.3 billion) for the cost of constructing the National Stadium.

“We must control costs as far as possible,” said Abe.

“We are determined to draw up the best possible plan, and we have to draft that plan as quickly as possible.”

There will remain private concerns within the International Olympic Committee (IOC), despite Abe's assurances that it will be ready, about whether the Stadium will now be completed in time for Tokyo 2020.

For the moment, though, they are publicly supporting the decision.

“The National Stadium is a national project, which will serve the people of Japan for many years to come," John Coates, head of the IOC's Coordination Commission overseeing Tokyo's preparations for 2020, said.

"This is why the Japanese Government is best placed to decide on what is appropriate for this venue.

"We take note of the decision by Prime Minister Abe to review the design plan and to look for a feasible solution that will offer a state-of-the-art stadium with top level conditions for athletes and spectators.

"We understand that the review of the Stadium will not affect its delivery for the Olympic and Paralympic Games, and we will work with the Tokyo 2020 Organising Committee to ensure that what is needed for the Games is delivered in the revised plan.”

Tokyo 2020, meanwhile, said they were seeking more details from the Government.

"The construction of the new National Stadium is a national project, and Tokyo 2020 is in the position of wanting to use the Stadium for the Tokyo 2020 Games," a Tokyo 2020 spokesman told insidethegames.

"We would like to ensure that the construction of the Stadium is completed in time for the 2020 Olympic and Paralympic Games.

"The decision to review the design has been made by the Government, and we are currently awaiting further details.

The original cost when the design by Iraqi-British architect Hadid was chosen by the Japan Sports Council following an international competition in November 2012 was ¥134 billion (£692 million/$1.1 billion/€1 billion).

Hadid, best known in the UK for designing the Aquatics Centre built for the London 2012 Olympics and Paralympics, faced a barrage of criticism almost as soon as her design was chosen over its appearance.

One Japanese architect, Arata Isozaki, said it looked “like a turtle waiting for Japan to sink so that it can swim away”.

Jim Heverin, the project director of Zaha Hadid Architects, denied that the cost of the new Stadium had risen because of the complicated nature of its design.

"It is not the case that the recently reported cost increases are due to the design, which uses standard materials and techniques well within the capability of Japanese contractors and meets the budget set by the Japan Sports Council," he said.

"it is absolutely right that the benefits and costs of the new National Stadium should be clearly and accurately communicated and understood by the public and decision-makers in Japan and we hope that this is one of the objectives of the review announced by the Prime Minister.

"Our teams in Japan and the UK have been working hard with the Japan Sports Council to design a new National Stadium that would be ready to host the Rugby World Cup in 2019, the Tokyo 2020 Games and meet the need for a new home for Japanese sport for the next 50 to 100 years.

"We have used our experience on major sports and cultural projects, including the hugely successful London 2012 Games and legacy, to design a Stadium that can be built cost-effectively and still deliver the flexible and robust National Stadium that the Japan Sports Council requires."