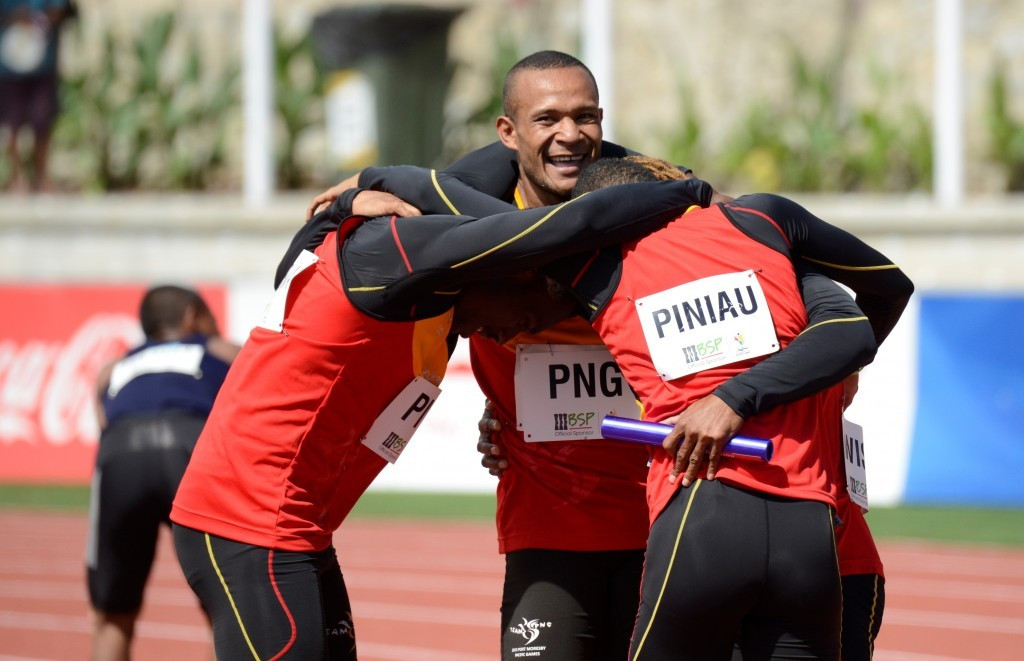 The host nation’s quartet, made up of Theo Piniau, Nelson Stone, Wesley Logorava and Kupun Wisil, snatched gold with a time of 40.62sec as Fiji’s team of Albert Miller, Vilisoni Roman Rarasea, Aaron Powell and Ratu Banuve Tabakaucoro had to settle for silver.

Wisil admitted it felt good to get the better of Fiji's Ratu Banuve Tabakaucoro, winner of the men’s 100m and 200m titles, in the final leg.

“I was running in front so I just told myself that the Fijian would not beat me,” he said.

There was some disappointment for Papua New Guinea, despite winning four other gold medals earlier in the day, in the women’s 4x100m relay as Miriam Peni, Toea Wisil, Adrine Monagi and Sharon Kwarula fell 0.10 seconds short of Fiji’s winning time of 46.17.

“Running against the Pacific sprint queen and her team, we knew it wouldn’t be easy because they would be out there to get gold,” said Seavula.

“But we thank God for his providence, and also without these three girls [her team-mates] the gold medal wouldn’t be possible.”

As in the men’s race, New Caledonia rounded off the podium.

The host’s first gold medal of the day came in the women’s long jump as Rellie Kaputin headed a Papua New Guinea clean sweep of the medals, breaking her own national record with a leap of 5.97 metres.

“I broke my own national record of 5.59m and I’m happy,” said Kaputin, who is now looking ahead to the Gold Coast 2018 Commonwealth Games after adding to her high jump and triple jump titles here.

“I know my coach, Philip Newton, is really happy with my results.”

There was also a double triumph for Papua New Guinea in the 400m hurdles as Donna Koniel won the women’s race with a Pacific Games record of 58.28 and Mowen Boino clinched the men’s in 52.51.

Koniel claimed her third gold medal of the Games and fourth overall at the expense of compatriot Sharon Kwarula and Fiji’s Ana Baleveicau, the silver and bronze medallists respectively.

Tahiti had the second highest gold medal tally of the day thanks to success in the men’s shot put and men’s long jump.

Tumatai Dauphin won the shot put with the a Pacific Games record of 19.14m.

Raihau Maiau came out on top in the latter with a long jump with a jump of 8.14m, a performance greatly assisted by a trailing wind of four metres per second.

The final athletics events of Port Moresby 2015 are the men’s and women’s half-marathons, which both due to start tomorrow at 6am local time.