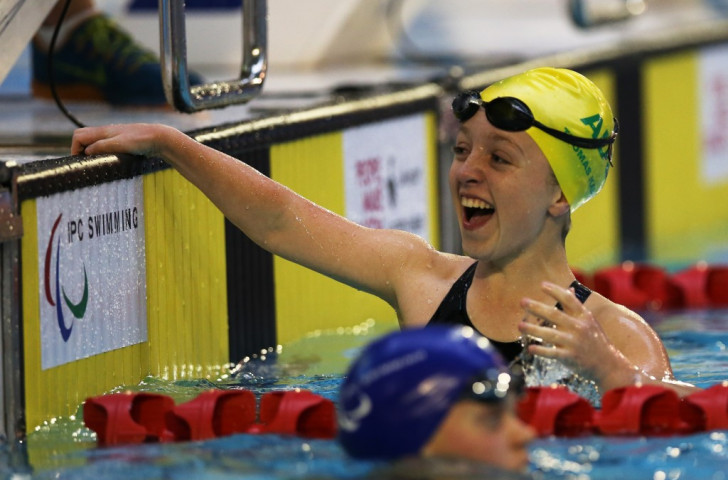 The 13-year-old announced herself on the global stage in spectacular fashion, finishing in 1min 34.95sec to claim victory ahead of British pair Charlotte Henshaw and Eleanor Simmonds.

Henshaw finished two seconds behind the winner, while team-mate Simmonds was a further three seconds back.

“This morning I thought I could get close to the world record from swimming a bit slower than I knew I could, and that I had a bit of a chance.”

On a night where six world records tumbled in the Scottish city, another young swimmer in fine form was 16-year-old Colombian Carlos Serrano Zerate, whose time of 1:16.68 is the quickest-ever recorded in the men’s SB7 100m backstroke.

His performance saw him clinch gold in front of defending champion and two-time Paralympic gold medallist Blake Cochrane, while The Netherlands' Simon Boer was third.

Runner-up Darya Stukalova of Russia, who finished in 2:24.86, clocked a world record time for the SM12 classification, and Ukraine's Anna Stetsenko won bronze.

Dutchwoman Lisette Teunissen also claimed a world record, powering to a commanding victory in the S3 women’s 100m freestyle in 1:37.18, finishing in front of Olga Sviderska of Ukraine and Kazakhstan's Zulfiya Gabidullina.

Nely Mirranda Herrera of Mexico’s 40.08 saw him break the world record in the S4 women's 50m for the second time this calendar year, while Italy's Arjola Trimi secured silver and Kazakhstan's Zulfiya Gabidullina rounded off the podium with third.

There was a major upset in the men's 200m individual medley as Canada’s Paralympic champion Benoit Huot was beaten for the first time in 13 years, losing his title to Ukrainian Denys Dubrov, who posted a time of 2:11.94.

It proved to be another successful day for the American swimmers as Jessica Long won her 21st world title, clinching the SB7 100m breaststroke in 2:11.94.

Compatriot Brad Synder sealed his second gold of this year’s Championships by registering 4:37.13 in the S11 400m freestyle.

New Zealand’s six-time Paralympic champion Sophie Pascoe got revenge for her defeat to Canada’s Aurelie Rivard last night by topping the podium in the SM10 200m individual medley with a time of 2:26.51.

China's Zhang Meng’s 2:32.02 was enough for bronze and saw her set an Asian record in the process.