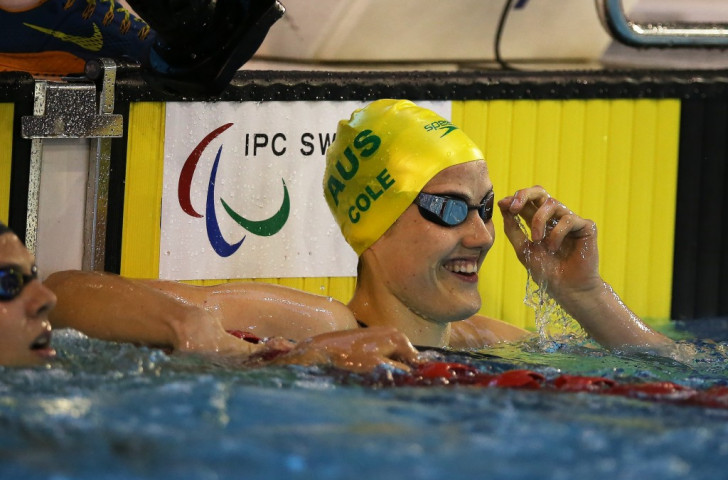 Australian Ellie Cole began the International Paralympic Committee (IPC) Swimming World Championships in style with a world record in the S9 100 metres as home favourite Ellie Simmonds relinquished her grip of the S6 400m freestyle crown on the opening day at the Tollcross International Swimming Centre in Glasgow.

Cole signalled her intentions from the outset by breaking the record in the heats before she went on to better that time in the final, clocking 1min 08.67secs to finish nearly three seconds ahead of Britain’s Tully Kearney.

British star Simmonds, who had won the S6 400m freestyle race at the previous two Paralympic Games and World Championships, was unable to defend her title as she was beaten to gold by Ukraine’s Yelyzaveta Mereshko.

The Ukrainian finished in a time of 5:21.76, with 20-year-old Simmonds having to settle for silver and Italy's Vianney Trejo clinched bronze.

“I’ve been the gold medallist since 2008, so it’s hard, but I’m going to get ready for the 100m breaststroke and go out and enjoy it,” Simmonds said.

“I gave the best that I could on the day which didn’t lead to a gold medal.

“But you can’t always get what you want.”

Elsewhere on a packed opening day, two further world records fell as five-time Paralympic champion Ihar Boki of Belarus lowered his own best time with a time of 23.20 on his way to men’s S13 50m freestyle gold.

Brazil's Carlos Farrenberg took second in an Americas record of 24.13, while Ukraine’s Iaroslav Denysenko was third.

The Brazilians were then able to round off the opening evening with a world record in a thrilling 4x50m freestyle race as Estefany Rodrigues, Clodoaldo Silva, Daniel Dias and Joana Maria Silva clocked 2:29.80 to take gold ahead of Ukraine and Russia.

Aside from Simmonds shock defeat, the favourites largely had it their own way on the first night as American pair Jessica Long and Bradley Snyder both claimed gold.

Long, a 12-time Paralympic champion, won the women’s S8 100m butterfly in 1:09.79, while compatriot Synder ensured he topped a World Championship podium for the first time by reigning supreme in the men’s S11 100m freestyle thanks to a time of 56.78.

Earlier on, Cortney Jordan had got the American party started by sealing victory in the women’s S7 100m freestyle in 1:11.93.

Dmytro Vynohradets of the Ukraine began his pursuit of defending his seven world titles in good form by securing the men’s S3 200m freestyle with a time of 3:28.89 and Canada’s Aurelie Rivard also made a promising start to her campaign with an Americas record time of 27.87.