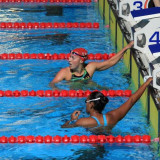 New Caledonia’s Lara Grangeon was again the star performer as she extended her Port Moresby gold medal tally to nine with a hat-trick, while home favourite Ryan Pini added a further two titles to his collection in Pacific Games record times at the Taurama Aquatic Centre today.

Grangeon continues to prove to be untouchable in the pool as she won the women’s 200 metres individual medley, nearly 10 seconds ahead of Fiji's Matelita Buadromo in 2min 17.84sec.

New Caledonia finished the evening in style by reigning supreme in the women’s 4x200m freestyle, clocking 8:51.66 to hand Grangeon her ninth gold medal of this year’s Pacific Games so far.

Fiji came through to take second ahead of hosts Papua New Guinea.

Pini, winner of the 100m butterfly at the 2006 Commonwealth Games in Melbourne, broke two Pacific Games records as he ensured he ended the night with a current personal haul of seven golds.

The 33-year-old clocked a Pacific Games record time of 23.10sec to win the men’s 50m freestyle ahead of Tahiti’s Stephane Debaere and New Caledonia’s Julien-Pierre Goyetche with another supreme display.

Pini, who claimed he will retire at the end of these Games, then returned to claim victory in the men’s 100m backstroke, finishing in 56.00, another Pacific Games best.

Tahiti’s Teiki Dupont was runner-up, while Goyetche sealed his second bronze of the evening.

Rahiti De Vos added another swimming medal to Tahiti's tally as he powered to victory in the 200m butterfly, beating New Caledonian pair Thibaut Mary and Hugo Tormento with a time of 2:04.23.

The swimming competitions at the brand-new Taurama Aquatic Centre, a purpose-built venue for the Games, are due to finish tomorrow.

Swimming at Port Moresby 2015 is due to officially end with the five kilometres open water swim for men and women on Sunday (July 12).