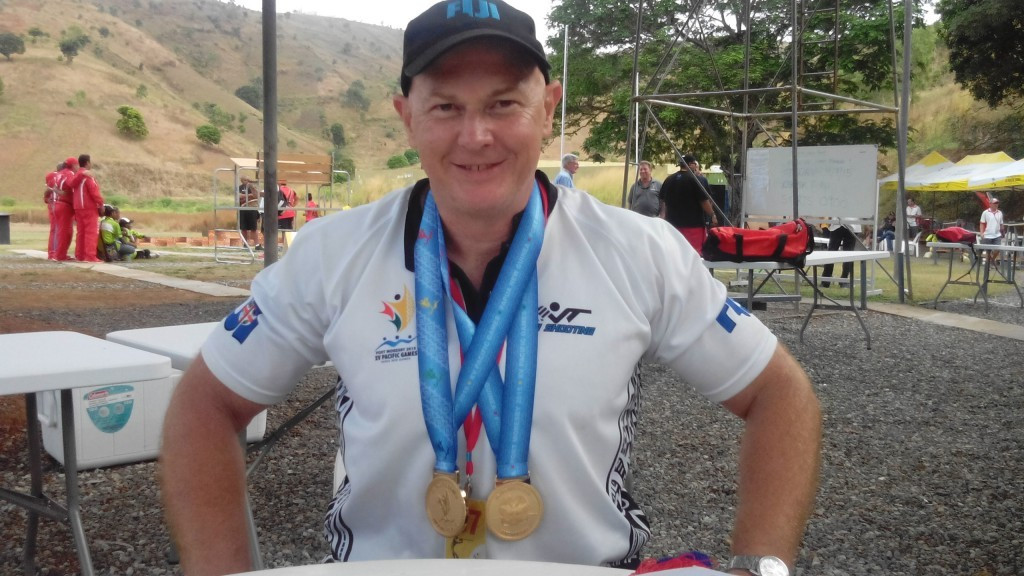 Pacific Games history was made in shooting today as three competitors pulled the trigger on perfect scores in the single rise event at June Valley Shooting Range.

With all three shooters tied, Kable held his nerve in the ensuing shoot-off to grab the gold medal.

And if Kable was pleased with his effort, he was even happier that young team mate and protege, Stephen, won silver.

“I started coaching Christian as an absolute beginner probably about four or five years ago,” said Kable.

“He’s progressed a long way in that time and he’s shooting exceptionally well.

“It was very rewarding for both my own performance, and Christian’s today.”

Kable, an Olympic and international shooter for a number of years and winner of multiple Pacific Games gold medals, said the standard of the 2015 Pacific Games surprised him.

“It [the standard] was higher than I expected,” he added.

“I honestly didn’t think that it would be more than one person shooting a hundred out of a hundred today.

“To have three [shoot perfectly] in a field of 28 was exceptionally high.”

Kable and Stephen combined with team mate Adarsh Datt to also claim a gold medal for Fiji in the single rise team event, ahead of New Caledonia and Tahiti.

"It was awesome," said Tere-Apisah, who will be defending her doubles title with her sister, Marcia, later in the Games.

"It’s really nice to have friends and family come out to support us play on home soil and win gold.

"The win is not only for ourselves but for our family and our country."

There was also a gold medal for Papua New Guinea in the women's squash team event as the trio of Eli Webb, Nicole Gibbs and Lynette Vai proved too strong for New Caledonia in the final, winning 3-0, 3-0, 3-2.

Fiji took bronze with a 2-1 win against Tahiti, who also missed out on third place in the men's team competition following a straight sets defeat at the hands of Papua New Guinea.