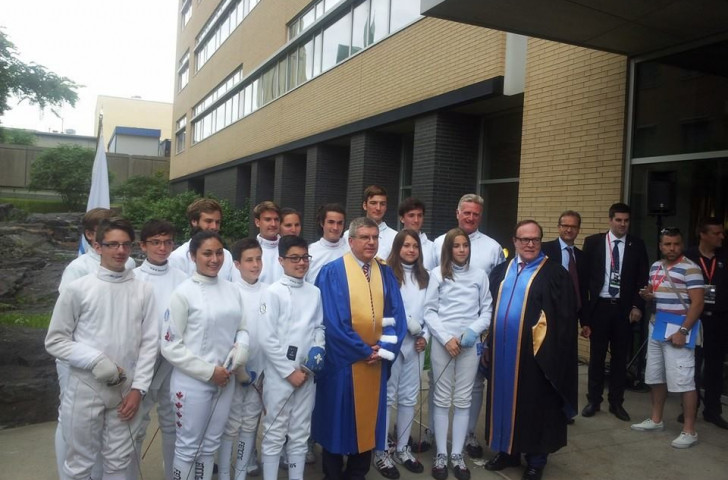 A highly emotional Thomas Bach paid his first visit back to the arena in which he won his Olympic team foil fencing gold medal 39 years ago today, fighting off tears as he paid tribute to a former team mate.

Forming part of a day of celebrations here to mark Canadian Olympic Excellence Day, the CEPSUM Sports Complex which hosted fencing competition at the Games had been transformed back into exactly how it looked in 1976, with a mock podium docked with flags having been reproduced.

After arriving alongside his wife Claudia and Canadian Olympic Committee (COC) President Marcel Aubut to cheers from a group of 500 children, the International Olympic Committee (IOC) head at first strolled around the room on his own, seemingly lost in thought as he relived the scene of his greatest sporting triumph.

He then recovered his poise to pose with officials and other athletes including Romanian gymnastics legend Nadia Comaneci, who received a succession of perfect 10 scores en route to three gold medals in Montreal, as well as two-time Olympic figure skating champion, Katarina Witt.

Bach, who travelled alongside a sizable group of officials including Pan American Sports Organization President Julio Maglione, then journeyed to the University of Montreal to receive an honorary doctorate from rector Guy Breton.

This was in consideration of the “unique ties” between the German and the city as well as the “innumerable successful projects to which he is signatory, the model of achievement he represents and the modern spirit he has brought to the international Olympic Movement”.

But it was when he spoke to accept his honour that the emotion of the day appeared to overwhelm him.

“I had a great feeling of joy to be back here,” he said, his voice stuttering.

“But it was also a very sad moment, because I remembered a team mate and my best friend in the team who died of brain cancer.”

"This is the Olympic life, but it is also life.

"It is a symbol of what life can mean to all of us and it shows that in sport, in Olympic sport in particular, victory isn’t everything, it is a moment of joy, but no victory makes anybody superior to anybody else.

“On the other hand, defeat is not the end of everything."

As Bach paused to blink back tears, the room broke into an involuntary round of applause, which turned into a standing ovation in order to release the tension.

His team mate Harald Hein, who scored the winning point in the final victory for the West German team over Italy, died of a brain tumour in 2008 aged 58.

With Bach a figure who appears rarely lost for words or thrown off his stride, it showed a new side to his character and was a reminder of the journey he has been on from fencer, to lawyer, to global sports leader.

Bach joined Aubut and other officials again later in the evening to unveil a set of Olympic Rings outside the Canadian Olympic House, praising the city and the Games for “allowing him to be standing here today”.

A busy schedule had also included meetings earlier in the day with athletes and a visit to the World Anti-Doping Agency headquarters before attending a World Sport Luncheon in the Palais des Congres.

Bach then gave a lengthy address, defending his Agenda 2020 reforms and aims to “get couch potatoes off the couch” in a style which was as familiar and comfortable as his later speech was charged and emotional.

He will return to Toronto tomorrow in time for the Opening Ceremony of the Pan American Games.