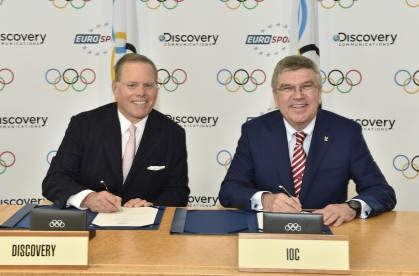 Eurosport will broadcast the Olympic Games across Europe as part of a deal starting in 2018 to cover two Olympic cycles following an agreement signed between the International Olympic Committee (IOC) and Discovery Communications, the parent company of the pan-European television sports network

It will apply to every European territory, except for Russia, accounting for 53 countries in total.

The only other exceptions are France and Britain for the 2018 and 2020 Games, since those rights have already been sold.

Discovery, the US-based company who bought Eurosport last year, will also sub-licence a portion of the rights in "many markets across Europe", it was added, meaning broadcasters will have to negotiate with them rather than with the IOC.

The deal, worth €1.3 billion (£926 million/$1.5 billion), marks a change with the previous system of working with a consortium of public broadcasters throughout Europe rather than one group, and follows other major television deals, including one with NBC Sports stretching until 2032.

“This is a significant agreement for Discovery and the IOC, and we are excited to have Eurosport, the pan-European home of Olympic sports, as a partner," said IOC President Thomas Bach.

"This agreement ensures comprehensive coverage of the Olympic Games across Europe, including the guarantee to provide extensive free-to-air television coverage in all territories.

"Discovery and Eurosport have demonstrated a major commitment to the Olympic Games, to Olympic sports and to the future of the Olympic Movement."

It will work across all platforms, including free-to-air television, subscription and pay-TV, internet and mobile phone in all languages across 50 countries and territories on the European continent.

“We took control of Eurosport a year ago and embarked on a long-term mission to reinvigorate and strengthen its networks and brand," said Discovery Networks International President JB Perrette.

"Today’s announcement is an incredibly exciting step forward on that journey.

"Eurosport’s unmatched technical prowess and ability to deliver the Olympic Games to 50 countries in 20 languages across multiple platforms is an important win for sports fans.

"The long-term programming commitment with President Bach and the IOC reaffirms Eurosport’s position as the leader in sports across Europe, and will significantly enhance Eurosport's presence on all platforms."