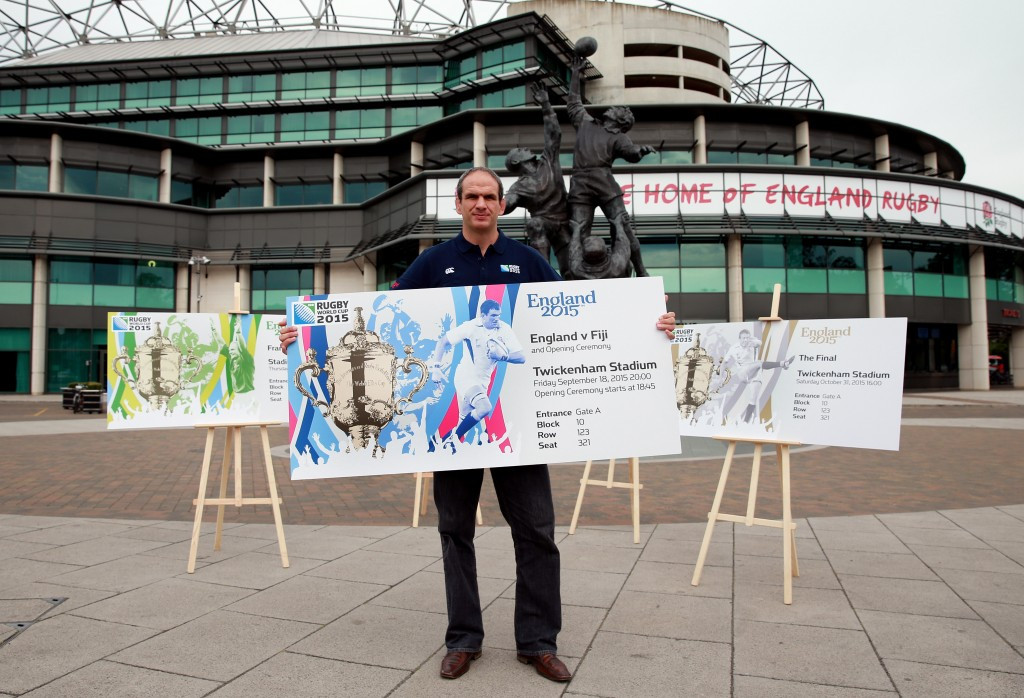 Johnson, who led his nation to victory at the 2003 Rugby World Cup in Australia, revealed the five design variations that will feature on the tickets for the 48 matches.

The unique design celebrates rugby and the rich history of the tournament, featuring the Webb Ellis Cup at its centre, alongside four Rugby World Cup winning captains.

The ticket blends the striking tournament look and feel with two rugby images reflecting the heritage of the game in England.

Across the lower half of the ticket is a representation of the fans, who are considered to be at the heart of the tournament.

The four designs, developed in three colours, will be issued for all matches throughout the pool phase, quarter-finals and semi-finals as well as the bronze final.

The tickets for the eight matches that will be played at the Millennium Stadium will also feature information in Welsh.

A special gold design has also been developed for the final and features one of the host nation's most celebrated sporting moments, Jonny Wilkinson's dramatic drop goal in 2003 Rugby World Cup final.

"It is an honour to feature as part of the ticket design for Rugby World Cup 2015,” said Johnson.

“Winning in 2003 holds some very special memories for me.

“Everyone can remember where they were when Jonny kicked that drop goal, so it's very apt that one of the host nation's finest sporting moments is marked in the special ticket for the final.

“Rugby World Cup 2015 looks set to be a great and global celebration of rugby and with tickets still available for some great matches, there is still a chance for fans to be there.”

World Rugby chairman Bernard Lapasset added: "Rugby World Cup is all about the fans, the shared experiences and unforgettable moments and the ticket design reveal represents another exciting milestone for fans around the world as they plan their Rugby World Cup experience.

“With excitement building and teams well into their detailed preparations, we are looking forward to what promises to be a very special Rugby World Cup that is great for the host nation and great for rugby worldwide.”

Tickets will be issued next month and once received fans will have the opportunity to bring the 2015 Rugby World Cup to life through the use of Blippar's Augmented Reality technology, with unique activations developed as part of the ticket design.

In a first for a major sporting event, the technology will allow fans to create a 3D interactive experience through their smart phones.

By scanning any Rugby World Cup 2015 match ticket with the Blippar app, fans will be able to unlock exclusive content with England 2015 ambassadors and Rugby World Cup 2003 winners Jonny Wilkinson, Lawrence Dallaglio and Will Greenwood previewing the match fans are attending.

They will also be able to access a 360 degree view of the stadium they are going to, and from August a view from their seat and navigational tools to help them get to the match, complementing the fan-first, location-sensitive experience delivered by the official Rugby World Cup 2015 app, which can be downloaded by clicking here.

"We are delighted to introduce a Rugby World Cup first, using augmented reality technology as part of the ticket design to enable fans to engage with the tournament through interactive content, which is a really exciting piece of activation,” said managing director of England Rugby 2015 Stephen Brown.

South Africa is represented by an image of Pienaar taken after they beat New Zealand 15-12 at Ellis Park Stadium to win the 1995 Rugby World for what was a significant moment in the country's history.

Australia is represented by an image of Eales taken during the semi-final of the 1999 Rugby World Cup at Twickenham Stadium, where they beat South Africa 27-21 before going on to win the tournament for the second time.

England is represented by an image of Johnson taken during the final of the 2003 Rugby World Cup in Sydney, where they beat Australia 20-17 to win the tournament for the first time.

Meanwhile, New Zealand is represented by an image of McCaw taken during their match against France in the pool stages of the 2011 Rugby World Cup which they went on to win, claiming the title for the second time.

Around 30,000 tickets were sold on Thursday as more went on sale via tickets.rugbyworldcup.com.

There are currently around 50,000 tickets available to buy for 20 matches including England versus Uruguay at the Etihad Stadium, Australia versus Fiji at the Millennium Stadium, New Zealand versus Tonga at St James' Park and South Africa versus Samoa at Villa Park.

Fans can continue to sell any unwanted tickets through the official resale service via tickets.rugbyworldcup.com.

Rugby World Cup 2015 are urging fans to only buy tickets from official sources.

For more information and to check whether a company or certain website is an official channel, fans can see the 'Official Checker' list of agents by clicking here.

Tickets are also still available via the official travel and hospitality programmes.

More details on these programmes can be found by clicking here.