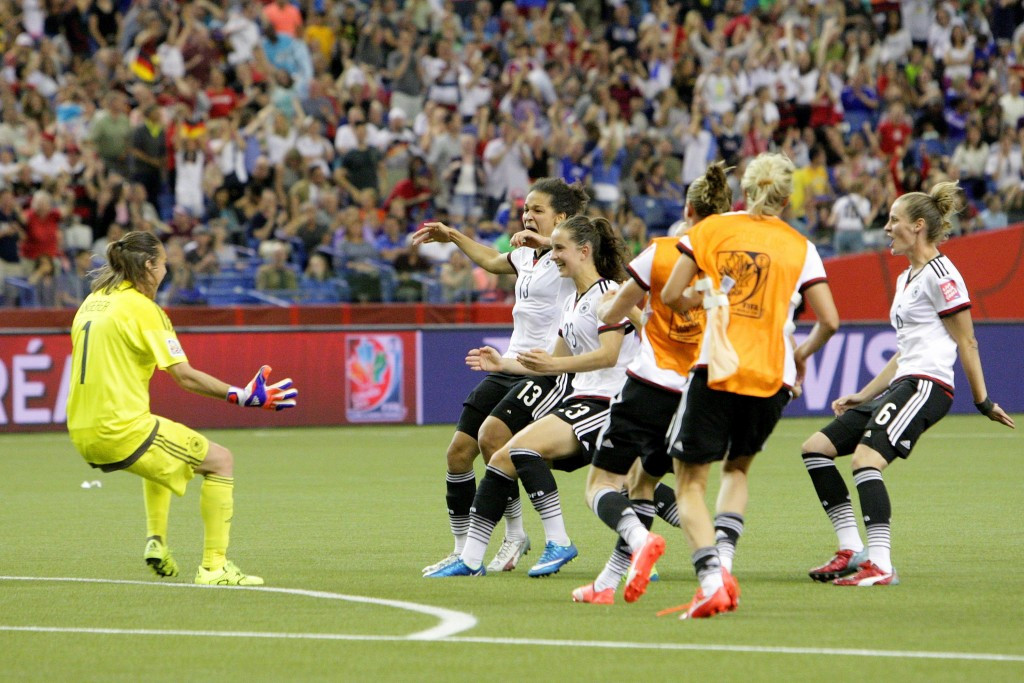 Germany booked their place in the semi-final of the FIFA Women’s World Cup after a dramatic penalty shoot-out victory over France at the Olympic Stadium in Montreal.

The two-time winners had been largely outplayed during the opening stages against a French side bidding for their second consecutive appearance in the last four stage of the competition.

Having looked the most likely source of the first goal Necib finally proved it early in the second half, latching on at a poor headed clearance by Babett Peter to shoot goalwards from outside the penalty area, with the ball then striking the German defender and deflecting into the corner.

France held the lead until six minutes from time when Germany’s Celia Sasic levelled the match from the penalty spot after Amel Majri had been adjudged to have handled inside the penalty area.

Having seen their lead slip away, France then missed a golden opportunity to take an extra time lead as Gaetane Thiney missed an open goal when unmarked inside the box.

She was made to pay as Germany’s converted all five of their penalties in the shoot-out to progress with Angerer saving French youngster Claire Lavogez’s effort.

Germany will now face the United States in the semi-final after they maintained their record of having appeared in the last four of every Women’s World Cup after earning a narrow 1-0 win over China in Ottawa.

The US had been the dominant team throughout the contest and merited their place in the semi-finals but saw Amy Rodriguez and Alex Morgan miss excellent opportunities in the first half, with Rodriguez wasting a one-on-one situation by chipping wide.

They secured a deserved lead early in the second-half, however, as midfielder Carli Lloyd headed into the Chinese net after a Julie Johnston cross and their advantage was nearly doubled when Ali Krieger struck the crossbar from distance.

Despite failing to add to Lloyd strike the United States maintained their clean sheet to seal their progress to Tuesday’s (June 30) semi-final with Germany in Montreal.