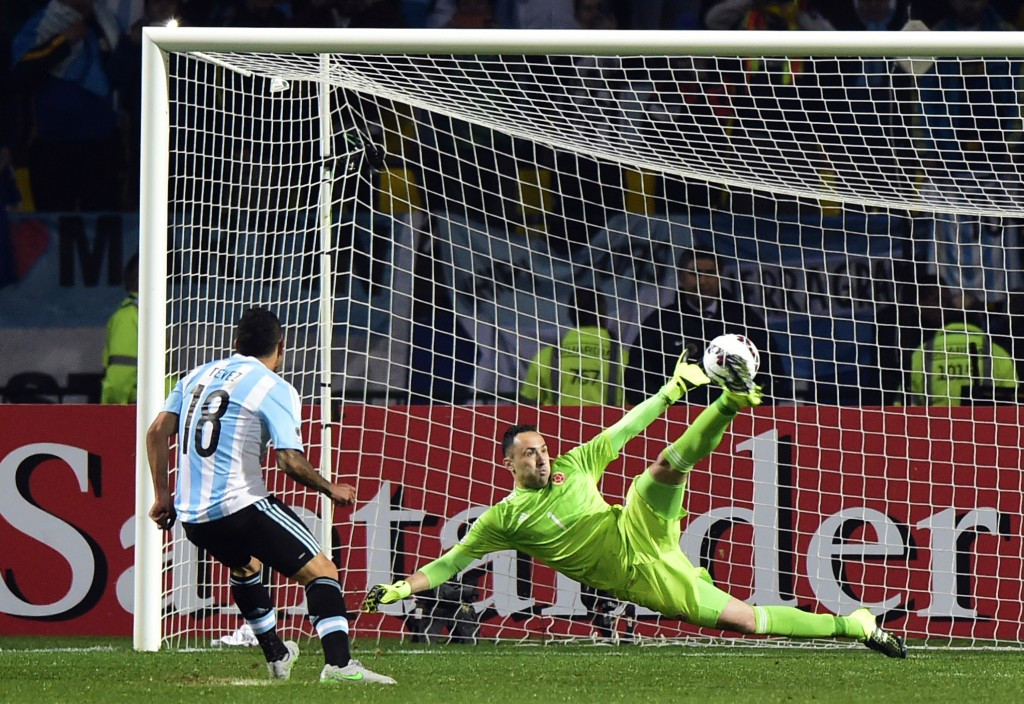 Argentina kept their dream of a first Copa América triumph since 1993 alive following a 5-4 win on penalties after a goalless quarter-final tie with Colombia in Viña del Mar.

The 2014 FIFA World Cup finalists, boasting the enviable attacking talents of Lionel Messi and Sergio Aguero, arguably could have won the game in normal time against a Colombia side who have failed to sparkle in Chile, having only score once throughout the duration of the tournament.

Goalkeeper David Ospina proved a formidable last line of defence for Colombia, though as he produced a series of stunning saves to keep his side in the match, including a miraculous double save in the first-half

Diving the wrong way the 26-year-old’s had managed to stick out a leg to deny Aguero’s near post effort and with the ball looping towards the head of Messi just yards from goal it looked like the Argentinians would take the lead, only for Ospina to recover quickly to dash across his goal and turn Messi’s effort around the post.

He then had to be at his best again in the second-half to deny Argentine Nicolás Otamendi as he directed the defender’s poked effort onto the post.

His superb save deserved some fortunate as, instead of rebounding into the net, it bounced kindly for his team-mate Juan Zúñiga to hammer the ball away from danger.

With Argentina clearly the better side throughout the duration of the 90 minutes and extra-time they will have been fearing a repeat of four-years ago when they were dumped out by the eventual champions Uruguay on penalties.

Their nerves were frayed further after Lucas Biglia and Marcos Rojo failed to capitalise on missed penalties from Luis Muriel and Zúñiga which could have sent them into the semi-finals.

Carlos Tevez, who had confirmed earlier in the day he would be transferring back to his boyhood club Boca Juniors from Juventus, finally saw off the Colombia’s challenge by firing past Ospina after Jeison Murillo had blazed his effort over the crossbar.

Argentina will now meet the winners of the final quarter-final match between Paraguay and arch-rivals Brazil due to take place on Sunday (June 28), while Chile and Peru are set to face each other in the second semi-final.