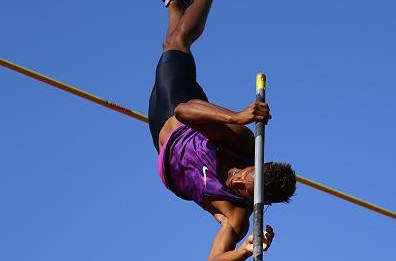 The event was not on the European Games programme and was officially organised by the Azerbaijan Athletics Federation in conjunction with the European Athletics Association, rather than Baku 2015.

But, with the actual team track and field competition in the Olympic Stadium having featured only the lowest tier of Europe’s nations, tonight’s action went some way towards making amends for the low standard of athletics seen at these Games so far.

In the absence of French world record holder Renaud Lavillenie, Holzdeppe, the reigning world champion and London 2012 Olympic bronze medallist, was the headline name and the 25-year-old lived up to his billing.

After easing through his early clearances, he only cleared 5.82m - a height three of his rivals had already scraped over - at the third and final attempt after summoning all of his champion pedigree.

From there he was unstoppable, clearing 5.87m and then 5.92m, adding a centimetre to his previous best set in 2013.

While Holzdeppe is already an established star, his closest rival Da Silva is very much the new kid on the block, but with today’s display he showed how he is very much a medal contender a year ahead of his home Olympics next year in Rio de Janeiro.

He twice broke his own South American record, clearing 5.87m and 5.92m, losing only on countback after both he and Holzdeppe had three failures at 6.02m.

Piotr Lisek, this year's European Indoor bronze medallist, and Czech Republic's Michael Balner had each cleared 5.82m to underline the high level of the competition.

Initial crowds lurking around an enclosed perimeter in the centre of the Square numbered in the hundreds, they were well into the thousands at the business end of the competition as both men and women competed at the same time on two parallel runs facing in opposite directions.

This was a unique and innovative format which should set a template for future competitions, it was claimed.

The women's event failed to live to the excitement of the men's, however, with leading entrant, Germany's Silke Spiegelburg, a non-starter due to missing her flight connection here.

Proceedings were opened by Azerbaijan Minister for Youth and Sport and Baku 2015 chief executive Azad Rahimov, who described the event as a first of its kind which should help boost the popularity of athletics in the European Games host nation.

Baku 2015 had provided "advice and support", insidethegames was told, with chief operating officer Simon Clegg and sports director Pierce O'Callaghan among those present on another boiling hot day, with temperature reaching 38 degrees were registered.

More of the same will be hoped for tomorrow when a men's high jump competition takes place, with reigning European champion and 2.42 jumper Bohdan Bondarenko of Ukraine the leading entrant.