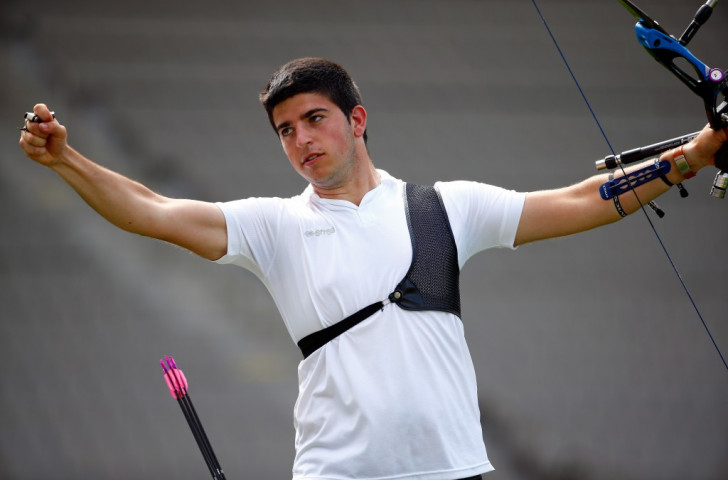 Garcia, who has enjoyed a consistent season to date, was unphased by the pressure and delivered an excellent performance to win Spain’s seventh gold medal at these Games, continually finding the centre ring of the target with effortless precision.

He gave Van Den Berg very little opportunities throughout as he dominated proceedings, posting two scores of 29 on his way to clinching his country's first archery gold of the Games.

The Spaniard, ranked 16th in the world,  was visibly emotional as he received his medal, standing proudly atop the podium with tears of joy running down his cheeks as his nation’s anthem rung round this Stadium.

Bronze went to Belarusian Anton Prilepov after he negotiated the tough test provided by Poland’s Slawomir Naploszek with a 7-3 triumph.

“Initially, I was emotional because of the victory but then when the anthem started playing I felt really Spanish and it was really overwhelmingly emotional," Garcia said.

"I was already shooting very well and I was expecting a medal but the fact that it is a gold medal, it is so wonderful.

"Now that I have a gold medal, I will feel less pressure to prove myself."

Both archers began the final in cagey fashion as they found their feet and adjusted to the change in conditions following a slight calming in the breeze.

After sharing the opening set, Garcia came to the fore and began to find his range, scoring 29 with a 10 on his final arrow of the second.

It proved enough to edge him ahead in the contest after the Dutchman, ranked 101st in the world, could only manage an eight, which proved costly.

Perhaps affected by nerves and the enormity of the occasion, Van Den Berg again could only post an eight with his final arrow in the third set, allowing Garcia to stretch his lead to 5-1.

Needing only to halve the fourth, the Spaniard started in ominous fashion, hitting a perfectly-executed 10 which set the tone for another score of 29 and the gold was secured with another pinpoint arrow that soared into the middle of the target.

The bronze medal match was a topsy-turvy affair.

After Prilepov opened up a 2-0 then 3-1 lead, Naploszek hauled his way back into the contest, squaring proceedings thanks to a score of 29 when his opponent could only record two fewer.

The Italians were the dominant nation in the archery event as a whole, winning both the mixed team and women’s team events.