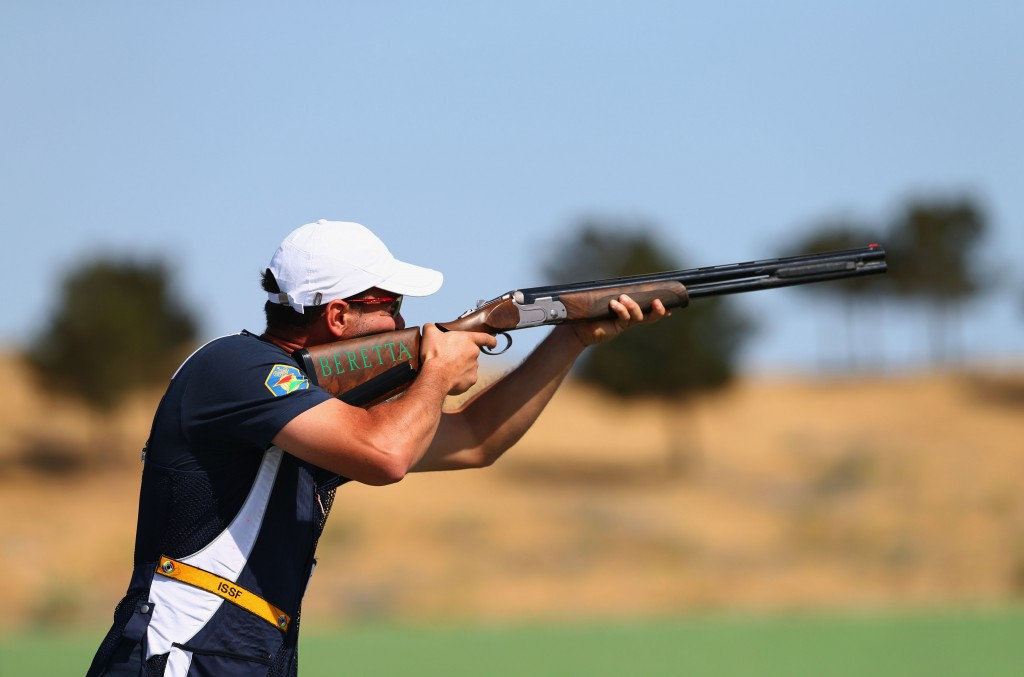 Boasting men's individual champion Valerio Luchini and women's individual silver medallist Diana Bacosi in their team, Italy were always likely to be one of the favourites for the mixed team skeet event and they lived up to their billing by dominating their semi-final against France and the Czech Republic.

They would face Cypriot pair Georgios Achilleos and Andri Eleftheriou in the final, who had already secured their country's first medal of the European Games after beating Slovakia by just one point in their semi-final, which also contained Germany.

Despite winning the opening round of the four-round final, Cyprus were soon behind as Luchini was in inspired form in the windy conditions.

Luchini did not miss in the opening three rounds of the contest to help Italy move into a 22-21 lead, with the crowd prepared for a thrilling end to the closing fought final.

Achilleos and Eleftheriou may have been forgiven for thinking they had won the gold after hitting all of their eight targets in the concluding round, but Luchini completed a flawless individual performance and Bacosi then held her nerve to hit all four of her targets and give Italy a 30-29 win.

"It's unfortunate this team event is not at the Olympics.

"It should be, because it's very interesting."

Petra Zublasing and Niccolo Campriani were forced to fight back from the brink of defeat to win the mixed team 10m air rifle event, having been 3-1 down to Denmark's Stef Olsen and Stine Nielsen in the first to five point contest.

Having begun in superb style with two shots scoring 10.7, a near perfect score, Olsen then produced a couple of uncharacteristic shots which scored under 10 to allow Italy to assume a 4-3 advantage in the contest.

The Danish team regrouped to force the match to a deciding round only for Olsen to produce his worst score of the competition, an 8.7, allowing Zublasing and Campriani to seal a 5-4 win and gold, with the duo both scoring 10.4 to earn the decisive final point.

Germany were able to secure the final gold medal on offer as Monika Karsch and Christian Reitz earned a narrow 5-4 win over Greece's Anna Korakaki and Konstantinos Malgarinos.

The German pairing moved into a 4-2 advantage with Karsch the star performer and, for a brief moment, they were announced as the winners following the seventh round of the match, which was mistakenly awarded to them rather than the Greek pair.

Despite Greece levelling the scores at 4-4 and forcing the match into a final decisive round, the Germans were able to hold their nerve and seal the 5-4 victory by scoring a combined total of 20.4 with their final shots compared to Greece's 19.3.

Spain and Russia also had to go to a crucial winner-takes-all final round in their bronze match, with the Russian pairing of Ekaterina Korshunova and 38-year-old Vladimir Gontcharov eventually securing a 5-4 win with a huge score of 21.0 in the decider.