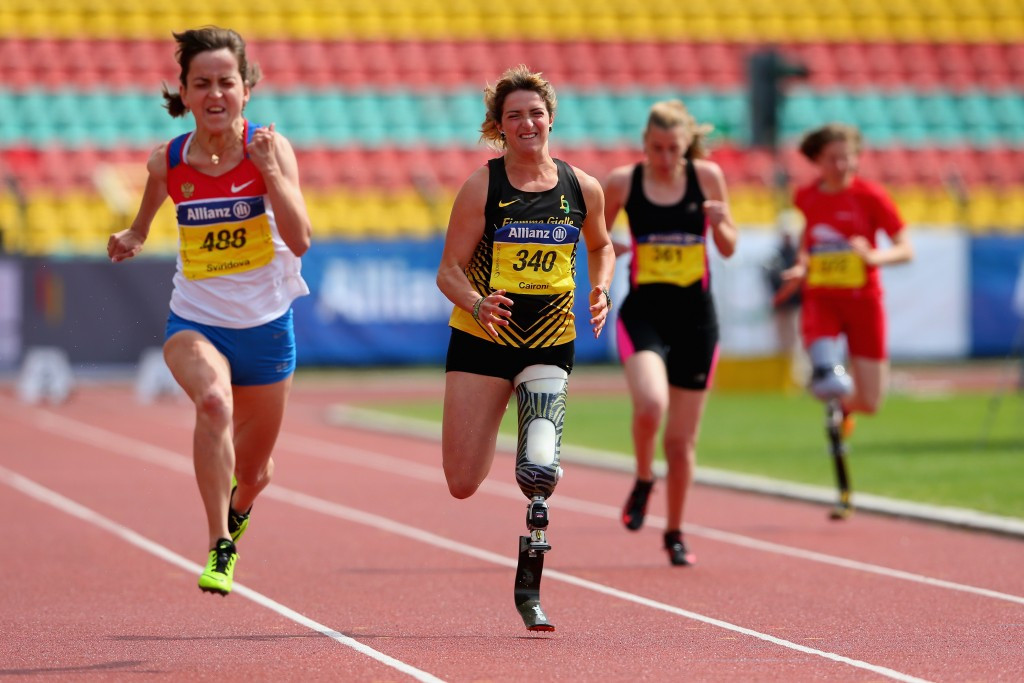 Italy's Martina Caironi continued her recent form as she broke the T42 200 metres record for the third time in a month on the final day of competition at the International Paralympic Committee (IPC) Athletics Grand Prix in Berlin, Germany.

Having set the new mark of 32.29sec at her home IPC Athletics Grand Prix ast week in Grosseto, Caironi lowered the mark by another 0.56 seconds  recording 31.73 in the Friedrich Ludwig Jahn Sportpark venue.

Caironi may have benefited by competing in the same race as South Africa’s T13 sprinter Ilse Hayes, who recently became the fastest female para-athlete in the world.

Hayes won the race in comfortable fashion, crossing the line in 25.04, the victory another step in her preparations to the IPC World Championships in October in Doha.

“I’m happy with that, I came here to run a really good bend because that’s what we’ve been working on and I think I achieved that today,” Hayes said

“Time isn’t important for me at this stage as I work towards Doha so all this competition is working well in terms of preparation.”

Evgenii Shvetcov of Russia also produced a world record performance over the 200m as the world and European champion posted a time of 24.45 in the T35 classification event to break the seven-year-old record of Hong Kong’ Wai Wa by 0.20 seconds.

Russia’s success continued over the distance as Alexander Zverev was victorious in the men’s T13 classification, posting a time of 22.72, while compatriot Alexey Kotlov crossed the line in 22.95 to win the T47 event.

Anton Prokhorov made it a fourth Russian victory in the 200m races by recording a time of 25.87, proving enough to win the men’s T42 race.

There were also victories for South Africa’s Anrune Liebenberg and Union Sekailwe after they won the women’s T47 and T38 events having posted times of 27.26 and 23.82 respectively, while The Netherlands’ Nienke Timmer claimed the T35 event in 35.55.

Russia’s Elena Pautova set a world leading time of 18min 10.19sec to claim win the women’s T12 5,000m, while Mathias Kohler claimed gold in the equivalent men’s class for the hosts after setting a time of 17:58.25.

On the final day of the three-day Grand Prix, Germany earned more medals in the field events as Maria Buggenhagen took F55 discus gold with a throw of 24.85 metres, while Andreas Wolfram won the F28 event with an effort of 40.39m.

Germany’s Markus Protte also secured victory in the F28 long jump event by leaping to 5.47m and Portugal’s Lenine Cunha claimed the F20 event with a superb effort of 6.32m.