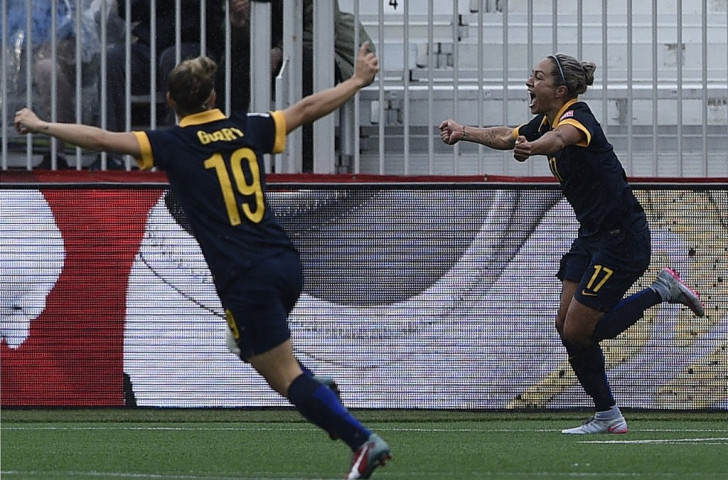 Australia caused one of the biggest upsets at the FIFA Women’s World Cup so far as they dumped Brazil out of the competition with a 1-0 victory at the Moncton Stadium to reach the quarter-finals for the first time in their history.

In what was a tense encounter, neither side could break the deadlock until Kyah Simon followed up Lisa da Vanna’s shot to slam home the winning goal ten minutes from time to earn the Aussies their maiden World Cup knockout stages win and send the world number seven ranked side home.

The Brazilians were tipped as one of the pre-tournament favourites but they came up against an Australian side keen to upset the odds.

Chances were few and far between throughout the majority of the contest although the game briefly sparked into life on the hour mark when Marta, who became the top goalscorer in the tournament’s history with her 15th Women’s World Cup strike in the group stages, hit a rasping effort that Aussie goalkeeper Lydia Williams did well to save.

Australia went straight up the other end and had arguably their best chance of the match when Emily van Egmond’s shot deflected wide before Simon was able to find the net to send her side through to the next round in dramatic fashion.

Hosts Canada also secured their last eight berth as they edged a tight contest with Switzerland 1-0, in which Abby Delanger’s 52nd minute goal proved decisive at the BC Place Stadium in Vancouver.

Despite all the endeavour on display, the match was a tepid affair as both sides struggled to fashion many clear-cut opportunities.

Thankfully for the packed crowd inside the Stadium it was the Canadians who managed to edge over the line as Delanger rounded off a sweeping move by converting Christine Sinclar’s unselfish pass to keep their dream of winning the tournament on home soil alive.

The other knockout round match to take place was a much more one-sided affair as France scored twice in the first eight minutes on their way to a comfortable 3-0 victory against South Korea.

The French set the tone for what would prove to be a trouble-free evening as Marie Laure Delie put them ahead before Eugenie Le Sommer bagged her fourth goal of the tournament shortly after.

With the win all but sewn up against the Koreans, making their first appearance at this stage of a World Cup, France took their foot off the gas slightly but they were still able to add a third just after the restart when Delie netted her second, steering home following good work from Le Sommer.

They will now go up against Germany in the quarter-finals in what is set to be a mouthwatering match-up between two of Europe's best.

The tournament is due continue tomorrow when Norway play England and two-times champions the United States face Colombia.