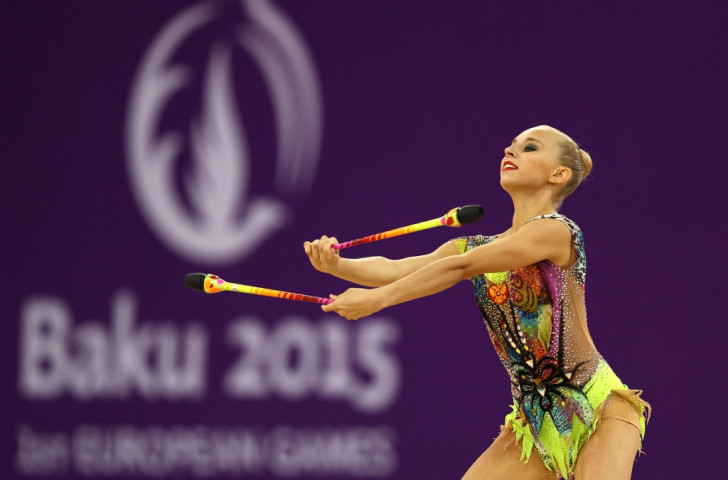 Two-time world champion Yana Kudryavtseva of Russia produced a supreme display of rhythmic gymnastics as she sealed a hat-trick of European Games gold medals on another dominant day for her country here today.

Following her all-around triumph earlier in the week, the accomplished performer claimed victory in the individual ball, club and ribbon finals to secure an impressive haul as the gymnastics event at Baku 2015 came to a conclusion.

The 17-year-old possesses a poise and a grace that belies her tender years and she began in style by cruising to individual ball gold with a points tally of 18.950, finishing ahead of Ganna Rizatdinova of Ukraine, while Belarusian Melitina Staniouta clinched bronze.

The trio would be interlinked throughout the day as the club final also ended with the same podium order, topped by Kudryavtseva thanks to a haul of 19.200.

The Russian then went on to claim gold in the ribbon discipline, using it as a graceful tool to dazzle the decent-sized crowd inside one of the most impressive venues Baku has to offer, amassing a total of 19.000.

"I am happy with today's performance, but there is no limit to your potential," the four-time European Games champion said.

"Today, I did everything precisely, so I got consistent scores."

Kudryavtseva’s success formed part of a commanding day for the Russians, who added another eight golds to the youngster’s personal total to finish with 11 medals out of the 16 available today.

Their dominance began with a clean sweep of all four trampoline golds in the first session as Dmitry Ushakov was victorious in the men’s individual event with a score of 60.090.

He then teamed up with Mikhail Melnik to win the synchronised competition, where they were awarded 51.100 points, and teammate Yana Pavlova also managed the trampoline double, clinching individual gold with 54.335 and the synchronised title with 46.400 alongside Anna Kornetskaya.

An elegant performance in the individual hoop saw Margarita Mansun take home another gold for Russia as her brilliantly-executed routine earned her 18.850, beating Belarusian Staniouta, who endured a frustrating day with two bronzes and a silver.

Marina Chernova and Georgy Pataraya were also at the double on a jam-packed final day as they maintained their unbeaten record throughout the event by adding acrobatic mixed pair balance and mixed pair golds to their all-around victory on Friday (June 19).

The duo demonstrated strength, poise and balance to monopolise the pairs events, thrilling the crowd with routines that had beauty and passion in equal measure.

Margarita Mamsun topped the podium in the individual hoop, earning 18.850 points for her routine as Russia finished top of the gymnastics medal standings on 18 golds.

Belgium tripled their nation’s overall total at the Games by clinching double gold in the group balance and dynamic group competitions, ensuring Russia didn’t completely have it all their own way.

Their routine in the dynamic event was particularly impressive, combining all the necessary attributes to produce a flowing piece of rhythmic gymnastics that had the crowd mesmerised from the off.

Spain continued their rich tradition in the aerobic discipline as Sara Lopez Moreno and Vicente Lli Lloris sealed the mixed pairs crown, beating off competition from Italy and Russia with 21.150 points, while Hungary reigned supreme in the groups final, amassing 21.144 on their way to a maiden gymnastics European Games gold.