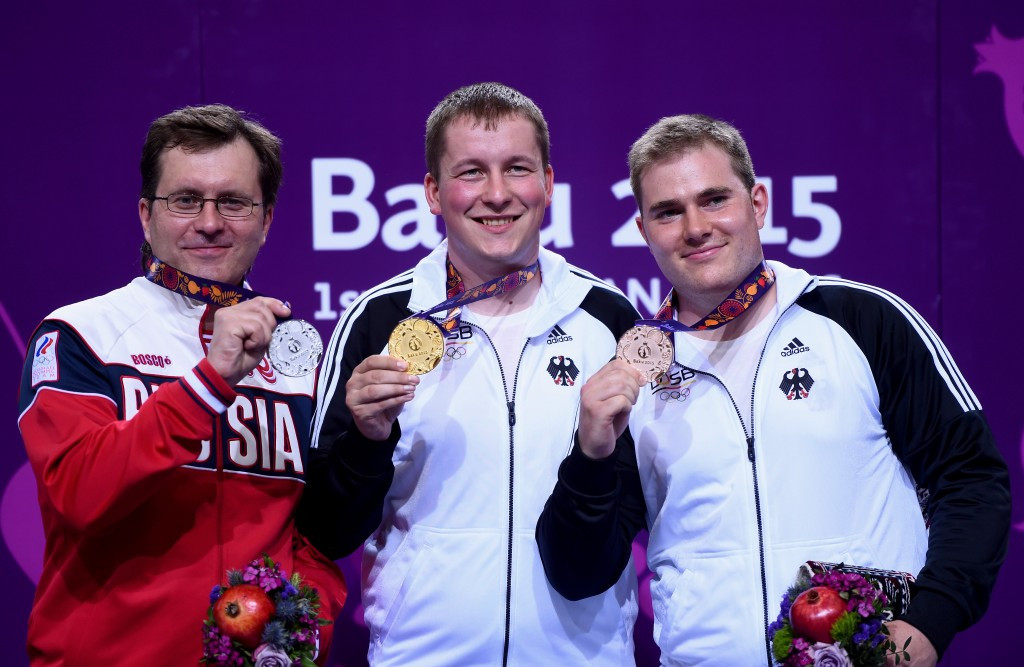 Reitz scored a total of 33 hits across the final’s eight series, ending up four points clear of Russian silver medallist Alexei Klimov, who was at the centre of the controversy regarding the bronze.

Klimov was tied with another German, world number one Oliver Geis, on 27 hits out of 35 after the seventh series, setting up a shoot-off to determine who would do battle with Reitz in a gold medal round, and who would have to be content with the bronze.

Both shot three out of five to force a second shoot-off, at which point the electronic scoring system seemed to stop working properly, resulting in a delay of several minutes.

Klimov and Geis then appeared to have scored four each in the second shoot-off, but with Geis already having fired his first round in a third attempt to split the pair, Klimov raised his hand to officials to point out a scoring discrepancy on his monitor from the second showdown.

Despite being awarded only four hits by the electronic system, Klimov made the claim that he’d scored five, which was eventually upheld after a further delay of seven minutes.

This sent him through to the gold medal round, where he lost out to Reitz, and relegated Geis to bronze.

"It was a technical mistake and I saw it on my monitor,” said Klimov.

“I did five hits, but they said just four hits and that is why I showed five to the jury.”

Geis added: “When I went to the range officer he explained that Klimov had five shots, but the monitor wasn't correct.

“He was a better shooter and won silver and that's okay.

“I have a good result with my bronze medal and am happy about that."

Reitz, who led from the first round but had been waiting for some 15 minutes as the shoot-offs unravelled, went first in the final five shots, hitting the target four times, which when added to his two-shot advantage over Klimov made the Russian's final five shots irrelevant.

"It was a little bit confusing the result of the shoot-off, but it wasn't a big problem," said Reitz.

"I prepared for the next series when it came and everything was good in the end."

Elsewhere on the penultimate day of European Games shooting action, France’s Valerian Sauveplane fired France to their first gold, as well as a quota place for Rio 2016, in the men's 50m rifle three positions event.

Sauveplane had a 2.2 point advantage over silver medallist Petar Gorsa, while Belarus’ Vitali Bubnovich added bronze to his 10m air rifle gold after surviving a shoot-off with Russian world number two Sergey Kamenskiy to determine who would progress to the final three.

There was also a gold medal for Italy’s Valerio Luchini in the men’s skeet as the world number nine fired a perfect 16 in the final having successfully appealed against a miss on his 12th target.

At that point, silver medallist Stefan Nilsson of Sweden was only one behind, but he also missed his final target to finish on 14.

Nilsson had the consolation, however, of securing a quota place for Sweden at Rio 2016.