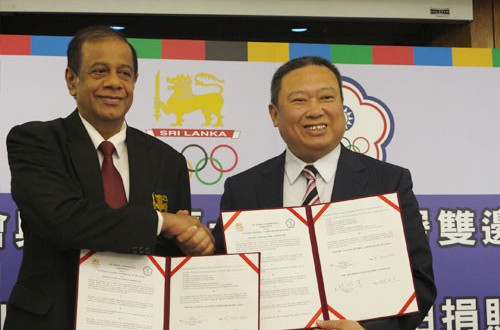 Fernando and Lin signed the agreement in on behalf of the respective institutions following a meeting in Taipei, with Lin outlining how it is hoped the move will be just the start of many future exchanges.

Under the terms of the deal, CTOC sponsor Victor Rackets Corp donated 100 sets of badminton rackets to Sri Lanka to help the country to develop in the sport as a "gesture to commemorate the beginning of a new relationship".

In thanking the donation, Fernando revealed how the badminton rackets will be distributed among underprivileged schools in the north of the island nation as part of Olympic Day Celebrations on Tuesday (June 23).

He indicated that this agreement will not only strengthen the net workings and exchanges with the athletes and coaches from these two countries, but also bolster the sharing of information and knowledge and the values enshrined in the "Olympic Charter".

These are based around "Volunteerism, Independence of Association and Good Governance", he explained.

This comes as Sri Lanka seeks to improve its sporting infrastructure a month after being stripped of the 2017 Asian Youth Games following a lack of organisation and coordination between the NOC and Government forces.

In an athletics sense, the nation is also focusing on winning a first Olympic medal since Susanthika Jayasinghe took 200 metres silver at Sydney 2000, with a seven-strong team competing across the four sports of athletics, badminton, shooting and swimming having drawn a blank at London 2012.

Sri Lanka won two medals at last year's Asian Games in Incheon, with both coming in the non-Olympic sport of cricket as the women's team took bronze before their male counterparts claimed gold after overcoming Afghanistan in the final.