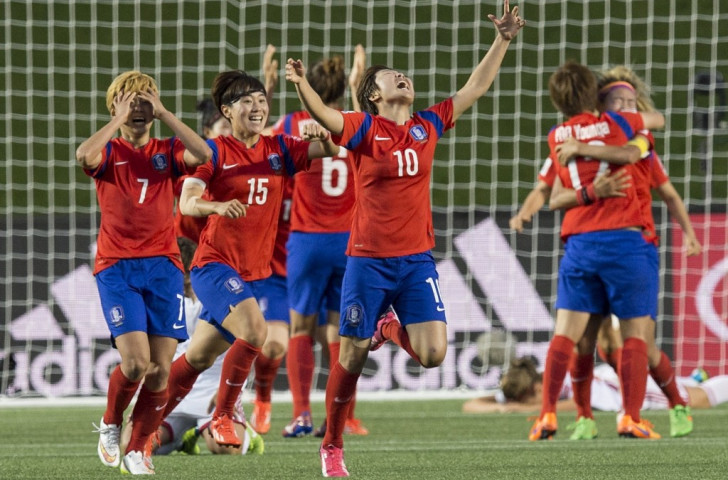 South Korea secured their place in the knock-out phase of the FIFA Women’s World Cup for the first time in history as they came from behind to beat Spain 2-1 at the Lansdowne Stadium in Ottawa.

The Spaniards still harboured hopes of qualification from Group E and they looked to be on course to progress after Veronica Boquete stroked the ball home following an excellent run and pull-back from Marta Corredera just before the half hour mark.

They had chances to extend their advantage but they could not  quite find the elusive second goal and it proved costly as Cho Soyun levelled proceedings with a pinpoint header eight minutes after the restart.

That goal gave the Koreans renewed belief that they could book a spot in the next round and the comeback was complete when Kim Sooyun’s overhit cross found the net in fortuitous fashion.

There was still more drama to come though as Sonia Bermudez struck the crossbar with a free-kick in the dying embers and South Korea managed to cling on for a hard-earned victory.

France await the Asian outfit in the second round after they confirmed top spot in Group F with a thumping 5-0 win over Mexico in Ottawa.

The French side have endured an inconsistent campaign so far, beating England only to lose to the unfancied Colombians.

But they finally clicked in their final group game.

The writing was very much on the wall early on for Mexico as Marie Laure Delie broke the deadlock after 35 seconds, and they had doubled their lead before the match was 10 minutes old thanks to a Jennifer Ruiz own goal.

Forward Eugenie Le Sommer then scored twice to leave France out of sight at the break before Amandine Henry hit an effort from distance that flew into the net in the second half to cap off a dominant win.

England also clinched their place in the knockout phase thanks to a 2-1 win over Colombia at the Olympic Stadium in Montreal.

They are due to face Norway on Monday (June 22).

Karen Carney reacted quickest following a Steph Houghton free-kick to put the English side ahead after 15 minutes, before Fara Williams gave her team breathing space by adding a second from the spot shortly before half-time.

A third goal never came for England and they were made to endure a nevrous finish when Lady Andrade scored in injury time.

Elsewhere, a late Raquel Fernandes strike maintained Brazil’s 100 per cent record as they overcame a tricky test against Costa Rica with a 1-0 win.

The Brazilians opted to rest players for the knockout phase but that did not stop them dominating proceedings, although they were made to wait until the 83rd minute to bag the solitary goal.

The tournament resumes on Saturday (June 20) with the first round of 16 match as Germany are due to face Sweden in Ottawa before China take on Cameroon at the Commonwealth Stadium in Edmonton.