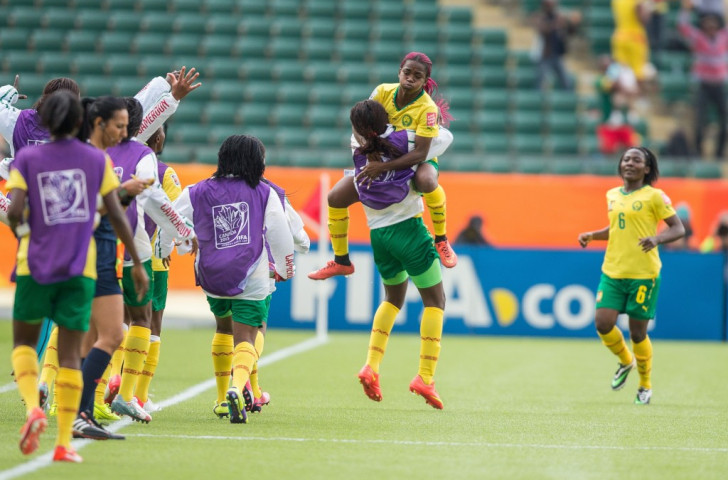 Cameroon booked a last 16 meeting with China at the FIFA Women’s World Cup after they launched a stunning turnaround to claim a surprise 2-1 victory over Switzerland at the Commonwealth Stadium in Edmonton.

The tournament’s second-lowest ranked side fell behind midway through the first half as Ramona Bachmann burst into the box before she unselfishly pulled the ball back for Ana Maria Crnogorcevic, who finished well from near the penalty spot to give the Swiss the lead.

At that point, it looked as though this contest would be a step too far for the African side but they restored parity two minutes after the restart thanks to a crisp finish from Gabrielle Onguene.

That goal sparked new life into Cameroon and they went in front the when Onguene turned provider, sending over a cross that was powerfully headed home by Madeleine Ngono Mani from close range.

The result saw the Cameroonian side secure a berth in the next round and they will be joined by defending champions Japan, who maintained their 100 per cent record with a narrow 1-0 win over minnows Ecuador at the Winnipeg Stadium.

The South American outfit may have feared the worst when Yuki Ogimi opened the scoring after just five minutes following their crushing 10-1 defeat against Switzerland and a 6-0 reverse at the hands of Cameroon.

But they managed to limit the Japanese side to Ogimi’s solitary goal, which came when her deflection from an Aya Miyama strike ricocheted into the net via the underside of the crossbar to clinch top spot in Group C.

In Group D, the United States continued their low-key start to the tournament with a tight 1-0 win against Nigeria at the BC Place Stadium in Vancouver.

Both sides cancelled each other out for large parts of the first half before American striker Abby Wambach broke the deadlock with a well-struck volley with just seconds of the opening period remaining.

Megan Rapinoe’s corner made its way to the back post where Wambach was well-placed to steer home the game’s only goal and ensure the two-times champions won Group D.

Australia were able to secure the second qualification spot in the group  after they drew 1-1 with Sweden in Edmonton.

The match began in frenetic style as Lisa De Vanna’s cool finish gave the Aussies a fifth minute lead but their advantage didn’t last long as Sofia Jakobsson found the bottom corner with a low-strike from 20 yards shortly after.

The Swedes now face an anxious wait to see if they can reach the next round by virtue of being one of the four best third-place finishers.

The group stage is due to conclude tomorrow when Mexico play France and England take on Colombia in Group F, before Spain entertain South Korea and Brazil clash with Costa Rica.