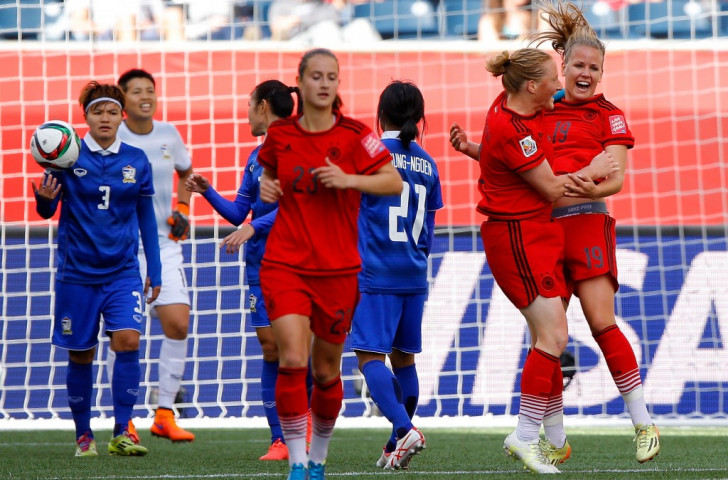 Germany booked their place in the next round of the FIFA Women’s World Cup with a comfortable 4-0 win over minnows Thailand at the Winnipeg Stadium.

The two-times champions were widely expected to rack up a colossal score but the tournament debutants held firm for large periods to ensure they did not suffer the misery of the Ivory Coast, who lost 10-0 at the hands of Germany in their opening group game.

Melanie Leupolz broke the deadlock after 24 minutes with a looping header from a corner but an heroic display from Thailand goalkeeper Waraporn Boonsing ensured her side were only one goal down at half-time as she made save after save to thwart the frustrated Germans.

The floodgates soon opened for Germany, tipped as potential winners pre-tournament, and Lena Petermann came off the bench to net a quick-fire double within the space of two minutes to all but seal the three points.

Sara Daebritz then rounded off the scoring late on, tapping into the net after she was left unmarked to clinch top spot in Group B.

They will be joined in the next round by Norway, who progressed by virtue of a hard-fought 3-1 win over a stubborn Ivorian side at the Moncton Stadium.

Ada Hegerberg calmed any early Norwegian nerves as she found the net from a tight angle and she was made to wait until just after the hour mark to score a second as the Ivory Coast remained resilient.

The victory was confirmed when Solveig Gulbrandsen reacted quickest during a goalmouth scramble to stretch their lead to 3-0, and there was a rare moment of Ivorian joy as Ange Nguessan’s solo run and finish gave them a consolation goal.

In Group A, hosts Canada claimed top spot despite being held to a 1-1 draw by The Netherlands, which was enough to earn a place in the second round.

The home nation went ahead early on to settle any tension lingering inside the Olympic Stadium in Montreal as Ashley Lawrence was the beneficiary of poor Dutch defending, guiding the ball home from 15 yards to break the deadlock.

Both sides continued to attack with any permutation still possible in what is perhaps the tightest group at the tournament but Canada couldn’t find a second, and substitute Van De Ven salvaged a point with an 87th minute equaliser.

The Dutch could still make the second phase as the third-best qualifier after China edged them into second place due to their superior head-to-head record following a 1-0 win over The Netherlands earlier in the group stage.

China finished their group campaign with a 2-2 draw against New Zealand in Winnipeg, in which Rebekah Stott gave the Black Ferns the lead only for Wang Lisi to restore parity from the spot.

Wang Shanshan’s brave header turned the contest on its head before Hannah Wilkinson levelled proceedings four minutes later and neither side could find a winner.

In Group D, Nigeria play the United States and Australia come up against Sweden.