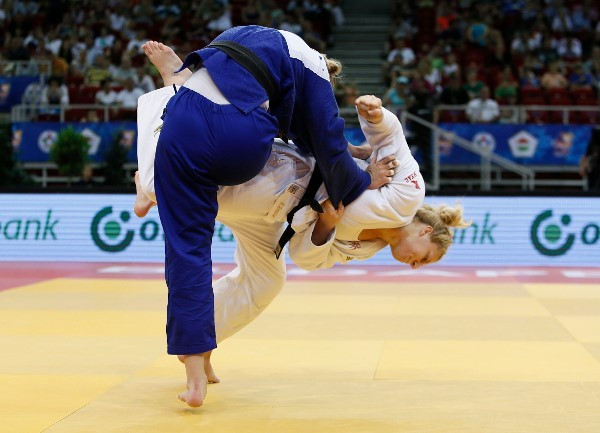 The Olympic champion countered for a waza-ari to open the scoring and never looked back, inundating the scoreboard as she pressed her Slovenian opponent.

Harrison registered five scores in total - the fifth was ippon, with a beautiful o-goshi just before the time ran out.

“I’m pleased, it was a tough day for me," said Harrison.

“It’s important for me to keep being the dominant fighter in this category and it’s all about Rio 2016 for me.”

The first bronze medal was claimed by Germany’s Luise Malzahn, who defeated 20-year-old Asian Championships winner Mami Umeki of Japan, while the second went to The Netherlands’ Marhinde Verkerk at the expense of Astana Grand Prix bronze medallist Assunta Galeone of Italy.

The Spaniard was a composed figure in her final contest as she countered an ouchi-gari attempt from her German counterpart to finally break the deadlock with a yuko with a minute left on the clock.

There was a win for Turkey in the over 78kg category as Kayra Sayit topped the podium in her first appearance after defeating African Championships winner Nihel Cheikh Rouhou of Tunisia.

Cheikh Rouhou was penalised with a shido for dropping down and that proved to be the difference in the last women’s fight of the competition.

The first bronze medal was claimed by Germany’s Franziska Konitz who bested Belarus’ Maryna Slutskaya with a yuko from an ouchi-gari, while Cuba’s Idalys Ortiz won the second as Kazakhstan’s Gulzhan Issanova was disqualified for accumulating four penalties.

Meanwhile on the men’s side, Portugal’s Celio Dias celebrated the first IJF gold medal of his burgeoning career as Pan American Open silver medallist Romain Buffet of France fell at the final stage of the under 90kg category.

Buffet, who took silver at 2011 Dusseldorf Grand Prix, received a shido for passivity after Dias attacked with a weak tomoe-nage.

The Portuguese fighter scored a waza-ari from an osoto-gari and the leggy youngster almost scored with the same technique just seconds later.

“I have had some slight injury problems recently so to come back today and achieve this makes me really happy.”

The first bronze medal was won by Cuba’s former world champion Asley Gonzalez, who emerged victorious against Slovakia’s Milan Randl, while the second was captured by 20-year-old newcomer Li Kochman of Israel against beaten semi-finalist Marc Odenthal of Germany.

There were also wins for Uzbekistan’s Yakhyo Imamov, Egypt’s Ramadan Darwish and Japan’s Takeshi Ojitani in the men’s under 81kg, under 100kg and over 100kg categories respectively.

Darwish continued his rich vein of form in the Hungarian capital as he defeated Olympic bronze medallist Dimitri Peters of Germany for top spot with Russia’s Adlan Bisultanov and Ukraine’s Artem Bloshenko joining them on the podium.