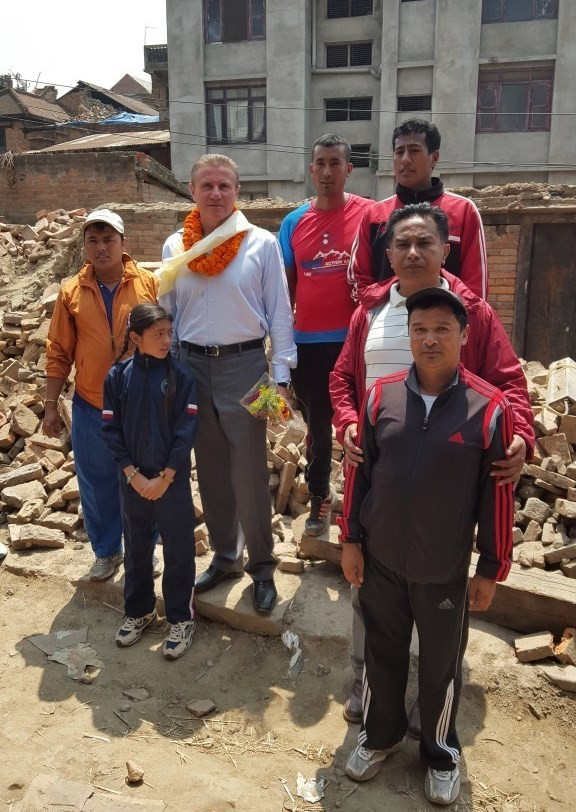 Sergey Bubka paid a hastily-arranged visit to Kathmandu, at the invitation of the Nepal Athletics Association (NAA), as it was confirmed that the Olympic Movement has promised $500,000 (£322,000/€445,000) to help the nation rebuild in the wake of the devastating recent earthquakes.

“People are staying in tents and now the rainy season is coming.”

Bubka also spoke about his visit at the IOC Executive Board meeting last Sunday (June 7) and Monday (June 8) in Lausanne.

In a separate development, the Olympic Movement has promised $500,000 (£322,000/€445,000) of support for Nepal, with the IOC, Olympic Solidarity and the Association of National Olympic Committees (ANOC) each contributing one-third of the total.

As is its usual practice, the Movement will wait for Governments and Non-Governmental Organisations (NGOs) to meet immediate humanitarian needs and restore essential services, while focusing its own efforts on the sports rebuilding programmes that will subsequently be needed.

The Movement is expected now to wait until local authorities come back with a detailed plan of action, at which point, insidethegames understands, more support may be forthcoming.

It also expects to play a coordinating role to try to ensure that contributions made by different sports bodies are applied as effectively as possible.

Bubka said: “The earthquake took many lives and damaged infrastructure including sports facilities.

“The Nepalese people, the families of the victims, need our support and the warmth of our hearts.

“As a chairman of the IAAF Development Commission, I have discussed with NAA President Rajeev Bikram Shah how we can provide support and restore sport infrastructure in Nepal.

“The IAAF philosophy is to bring partnerships, so if the Government provides land and contributes to prepare the headquarters, the IAAF will provide a modern synthetic track in Nepal.”

He also promised to send experts to assist Nepal to improve sports conditions and to bring high-level coaches to the country.

Bubka - who, like Sebastian Coe, is campaigning for the IAAF Presidency, in an election scheduled for August 19 in Beijing – also attended the Asian Athletic Association Congress and the 21st Asian Athletics Championships in Wuhan.

“They are striking demonstrations of Asia’s huge potential in our sport.”