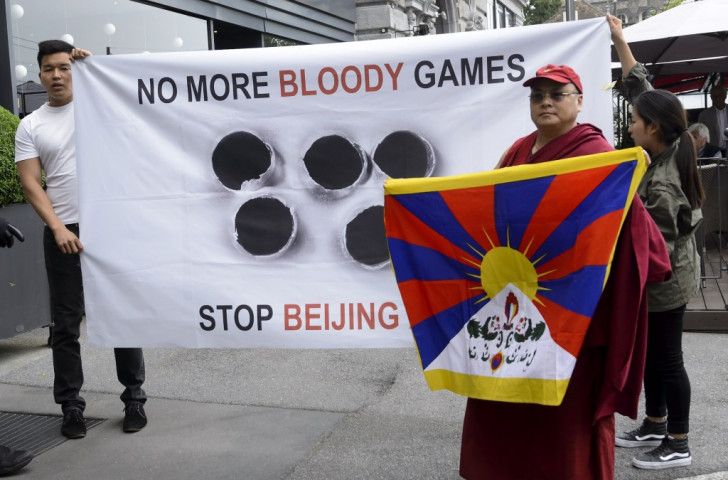 Several International Olympic Committee (IOC) members believe its own Evaluation Commission underestimated the travel distance between the three venue clusters proposed in Beijing's bid for the 2022 Winter Olympics and Paralympics, insidethegames has been told.

This comes on the second and final day of the Candidate City Briefing here - the last major opportunity for Beijing and Kazakh rival Almaty to present their plans ahead of a decision being made between the two at the end of next month - was disrupted today by a small group of pro-Tibet protesters attempting to derail the Chinese campaign.

A handful of protesters disrupted presentations made here by bid officials today, with several entering the hotel and unfurling flags in the lobby.

One even broke into the room where the plans were being outlined to the media, before being dragged away by police.

Others gathered outside the hotel, carrying banners and chanting "Free Tibet" and "No More Bloody Games" in response to what they see as broken promised by the Chinese that the 2008 Summer Games would be a way to improve the plight of Tibetans in the country.

The protest is unlikely to influence many IOC members, whose concerns relate more to the technical aspects of the bid, such as a complete reliance on artificial snow and the 193 kilometres distance between Beijing and the farthest mountain venue cluster close to Zhangjiakou.

At a two-hour meeting yesterday between the Evaluation Commission, International Federations and members, it was claimed by experts that, while a 50-50 balance between artificial and natural snow is usually recommended, so long as the weather is not unnaturally warm it should be viable to create and stockpile the required amounts.

This does pose questions about the sustainability of the Games and how much the venues would really become a winter hub after the Games, however, something reportedly touched upon in the closed meeting but not addressed in huge detail.

More subject to debate was the bid team's claim that the creating of a high-speed railway, to be completed by 2019 but not included in any Games-related budget as it was supposedly planned before the campaign was launched, would cut the three hour driving time from Beijing to Zhangjiakou to 50 minutes, with distances to the Alpine and sliding venue in Yanqing just 20 minutes.

In the IOC Evaluation Commission report. it was written that "Beijing 2022 confirmed during the Commission’s visit that approximately 10 minutes would need to be added to these times to account for waiting times".

It added: "The Commission believes that transfers and waiting times could further extend the travel times under some circumstances."

But, several members raised concerns that it would actually be a lot longer than this, an IOC member told insidethegames, with it a 25-minute drive from the proposed IOC Hotel to the Railway Station, and then further time required to navigate security and travel to the venues.

This could mean total time for members could be as long as 90 minutes, some have claimed, with the journey made all the more difficult by changing between cars and trains.

Concerns also exist over other pledges made regarding the railway, such as the fact that trains would supposedly run at five minute intervals at peak times, something that would pose security questions considering the speed they would be travelling.

Beijing remains the favourite over Almaty ahead of a decision due to be made at the IOC Session in Kuala Lumpur on July 31.

But, following an impressive performance by Almaty yesterday - particularly by bid leader and Kazakh Prime Minister Karim Massimov - it is thought the gap may have narrowed a bit.

Almaty emphasised their Governmental support and financial solidity due to the existence of a $75 billion (£49 billion/€67 billion) sovereign wealth fund reserve,  with their main challenge now involving convincing IOC members the required number of hotel rooms will be built in time.

Sixty per cent of the required rooms are already completed, with a degree of scepticism remaining over whether required investment will be found for others, although the region's tourist attraction could make this more doable.