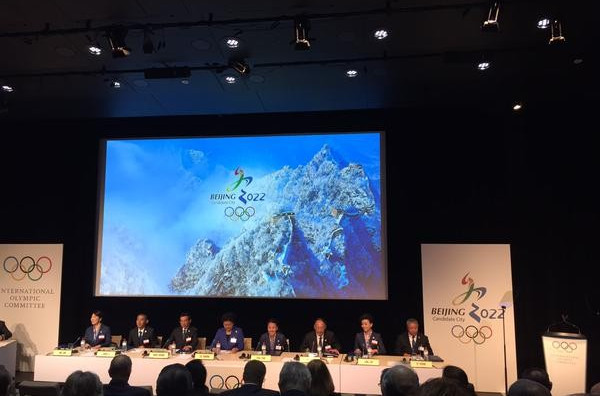 Beijing 2022 produced a "slick and professional" presentation to International Olympic Committee (IOC) members today in the race for the 2022 Winter Olympic and Paralympics, strongly batting off concerns about a lack of snow and winter vibe.

While Almaty, the Chinese capital's only rival in a two-horse race, focused on political clout within their bid team, Beijing opted for technical experts.

Alongside the likes of Vice-Premier Liu Yandong, IOC vice-president Yu Zaiqing and Chinese Olympic Committee President Peng Liu, were representatives from both the project management and legal affairs and the planning and technology departments, as well as a financial expert who was also a managing partner at PwC China.

They addressed many of the concerns about the bid outlined in the IOC Evaluation Commission Report, including the conditions as well as the 193 kilometres distance between the three venue hubs of Beijing, Yanqing and Zhangjiakou.

IOC members afterwards spoke positively, pointing out how similarly long travel distances have been seen at the last two Games in Vancouver in 2010 and Sochi 2014, and that questions on water issues were well addressed.

"They play to all their strengths and were very professional.

"They were asked about the water issues and they answered it very well."

Despite the Report outlining potential risks, other members seemed unconcerned, with Ukraine's Sergey Bubka claiming: "Today, you can have natural or artificial snow, I do not see this as an issue".

International Ice Hockey Federation President René Fasel praised the Chinese ice venue plans, before outlining how, because the International Ski Federation have approved mountain plans, their judgement must be accepted.

This suggested that members had taken all of the Chinese commitments at face value, despite some pointing out that similar pledges made before the Beijing 2008 Games - such as using the Games to reduce air pollution levels - had not been realised.

There are also concerns about the bid's full compliance with the Agenda 2020 reform process, with Beijing refuting this by claiming their bid is "compact" and sustainable, but within three distinct rather than one venue hub.

St Lucia's Richard Peterkin provided a more equal assessment, claiming that the lack of detailed critiques of specific issues permitted in the question and answer format means "there will probably be questions in some peoples minds" before adding that, "in general, they addressed all of the issues".

"China will always hit all the right buttons, it was a very professional presentation," he added to insidethegames.

"If we had to rank them on nothing but presentation skills, they would always be ahead over most people.

"Almaty has the edge in terms of what they look like, their authenticity, but they need to dispel any concerns people may have about their organisation."

“It was really impressive to see how both cities had embraced the reforms of Olympic Agenda 2020 just six months after the recommendations were unanimously approved by the IOC," he said.

"You could see a clear focus in both bids on sustainability and affordability.

"Both presented very well balanced budgets, and both clearly demonstrated what they wanted to achieve, following Olympic Agenda 2020, by building their proposals into the long-term development plans of their city, region and country.

"Both cities had different approaches and are starting from different points: Almaty plans to develop a traditional winter sports centre, and leave the lasting legacy of transforming the region.

"On the other hand, Beijing showed excellent use of the 2008 legacy, and also plans to create a sporting legacy by giving more than 300 million Chinese access to winter sports."

Follow up meetings will take place tomorrow at the Palace Hotel between bid officials and IOC members on an individual basis.

A final decision will then due to be made at the IOC Session in Kuala Lumpur on July 31.