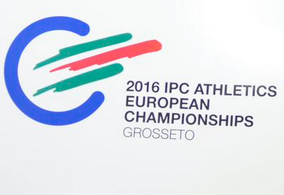 The official emblem for the 2016 International Paralympic Committee (IPC) Athletics European Championships in Grosseto has been unveiled.

The launch of the logo, created by renowned Italian graphic designer Piero Gratton, coincides with the staging of an IPC Athletics Grand Prix event in the same city from Friday (June 12) to Sunday (June 14).

The logo features a number of references linked to Grosseto and the Paralympic Movement, with its circle reflecting the image of a racing wheelchair wheel and the letter "C" for Championships.

Gratton has utilisted the colour blue in the design to match the colour of Europe’s flag, as well as that of the Grosseto track and the Terranean Sea, which provides a welcome point for all visitors to Grosseto and the surrounding region.

The green and red lines signify the colours of the Italian flag and emphasise that the country is staging the event for the first time, while the overall colour scheme is reflective of the IPC Agitos.

“I am particularly proud of the European Championships logo,” said the President of the Italian Federation of Paralympic and Experimental Sports (FISPES), Sandrino Porru, at the launch.

“It identifies an athlete racing on a wheelchair but represents at the same time the Paralympic world which includes all those who want to be part of it by joining the Grosseto 2016 event.

“This is the most important gold medal that the FISPES and the Italian Paralympic Committee are targeting for the next few years.”

Alfio Giomi, President of the Italian Athletics Federation, added: “I am impressed by the beauty and clarity of the message contained in the logo.

“I am confident that the 2016 European Championships will be a huge success considering this year’s record number of Grand Prix participants and the extraordinary commitment of the city of Grosseto and its volunteers.”

Next year’s European Championships, scheduled to take place from June 10 to 16, will provide a final chance for the continent’s athletes to compete at a major event before September's Paralympic Games in Rio de Janeiro.

Around 700 athletes from 40 countries are expected to battle for medals in the Carlo Zecchini Olympic Stadium, which has hosted a number of major events in recent years, including the 2004 International Association of Athletics Federations (IAAF) World Junior Athletics Championships.

Grosseto, which has staged an IPC Athletics Grand Prix event in each of the past three years, will be looking to build on the success of last year’s European Championships in Swansea, where Russia topped the medal table, ahead of Ukraine and the home nation Great Britain.

Ryan Montgomery, head of IPC Athletics, added: "We are delighted with the logo which has been created for the IPC Athletics European Championships which take place in Grosseto, Italy, in June 2016,”

“It represents the excitement of our event and gives a real Italian essence to the Championships and its build up.

"I have every confidence that the host organisers and the Italian Federation will continue their hard work to ensure that these Championships rank among the best ever staged."