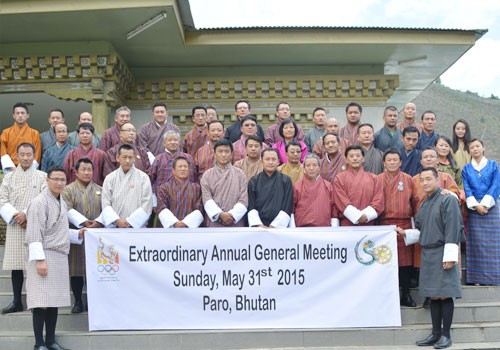 Prince Jigyel Ugyen Wangchuck has been unanimously re-elected President of the Bhutan Olympic Committee (BOC) for a second term at the body’s first Extraordinary Annual General Meeting (AGM) in Paro.

Wangchuck, who will continue in his role until 2018, thanked the BOC General Assembly members for placing their trust and faith in him.

He stated his intention to build upon the reform process initiated in his first term, and work towards establishing an apolitical and democratic governance system in the sports sector, to deliver sports to all.

“Although sport has now attained its rightful place in the national development agenda and is now an integral part of the 11th five-year development plan, there is still so much that needs to be done to create a firm foundation for a dynamic and vibrant sports sector in Bhutan," said the official afterwards.

“All stakeholders have to work collectively, to serve a common, higher purpose, for the benefit of our students, athletes, community and nation.”

The BOC General Assembly is the highest decision-making body of BOC, with approximately 45 members in attendance.

Among other items discussed and presented to them were the improvement of BOC governance structure and the appointment of a body to elect a BOC Executive Committee.

A Dzongkhag is an administrative and judicial district of Bhutan, of which there are 20.

The next BOC AGM is scheduled to take place in January of next year in the town Phuentsholing.