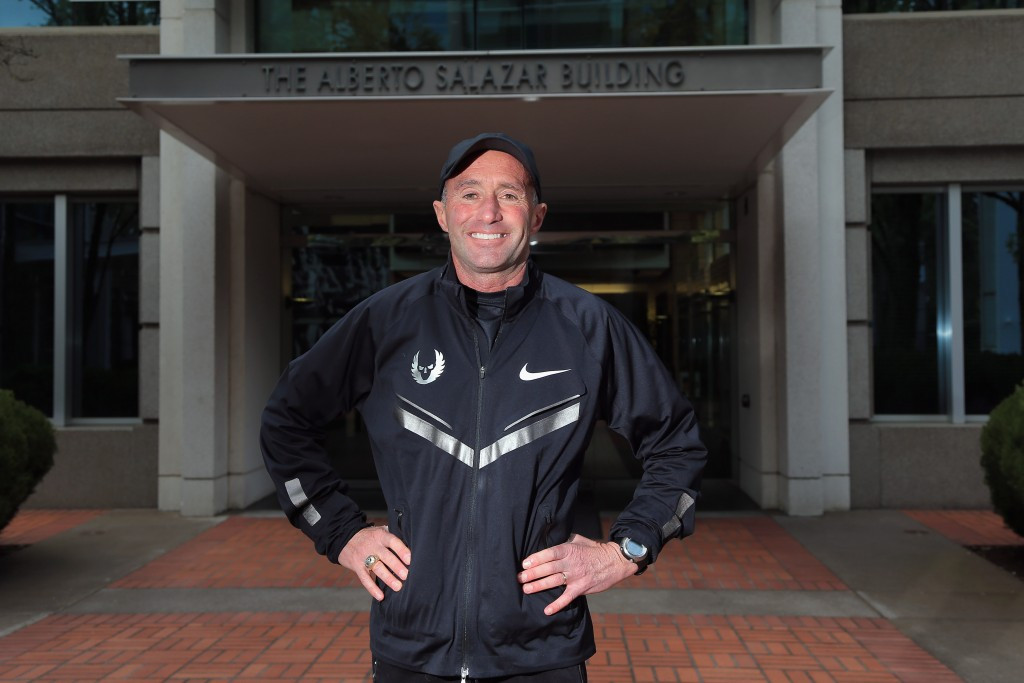 The BBC used the Six O'Clock News bulletin to publicise the Panorama programme Catch Me If You Can, which was broadcast later in the evening.

The documentary - for which Salazar declined to be interviewed - featured allegations of anti-doping violations from a number of former athletes and staff at Salazar’s training base in Portland, the Nike Oregon Project.

They include Steve Magness, who was Salazar's number two at the Oregon Project in 2011, and Kara Goucher, the 2007 world 10,000m bronze medallist.

The BBC claimed it was aware of “at least seven athletes or staff associated with the NOP who say they have gone to the United States Anti-Doping Agency (USADA) with their concerns, though USADA does not confirm or deny investigations”.

The allegations against the former three-times New York City Marathon winner’s methods range from experimenting with the use of testosterone to giving athletes prescription medications they either didn’t need or weren’t prescribed in order to gain an edge.

There is no suggestion that Farah has broken any rules.

But evidence is shown suggesting Rupp, his training partner who finished second behind him at London 2012 and has worked with Salazar since he was 15, was using testosterone even while he was still at school.

In a statement, Salazar said: "Allegations your sources are making are based upon false assumptions and half-truths in an attempt to further their personal agendas."

None of the Oregon Project athletes have ever tested positive for drugs.

Salazar is now one of the world's most successful coaches.

He has worked with Farah since 2011, with a philosophy involving intensive training and the use of the latest scientific techniques.

Magness, who is now head coach of the University of Houston cross-country team, left the Project within two years after becoming disenchanted.

Goucher left in 2011, after seven years working in the Project.

"From my experience, Alberto and the Oregon Project have always strictly followed WADA (World Anti-Doping Agency) rules and if there is ever a question seek guidance from USADA to ensure they are correctly interpreting Wada's rules."

Rupp, 29, insisted: "I am completely against the use of performance enhancing drugs.

David Howman, chief executive of WADA, said he was "disturbed" by the allegations.

He added: "I would be not only disturbed, I would be very disappointed and that's why I think it needs to be scrutinised by us as an independent body."

Goucher, who was training at the Project along with her husband, Adam, told the BBC that Salazar had encouraged her to take the thyroid drug Cytomel to lose her baby weight in 2011, after the birth of her son.

She claims the coach knew she did not have a prescription for Cytomel.

Salazar said: "No athlete within the Oregon Project uses a medication against the spirit of the sport we love.

"Any medication taken is done so on the advice and under the supervision of registered… medical professionals."

The programme heard claims that testosterone was seen on several occasions by athletes and staff, including a massage therapist at an altitude training camp in Utah in 2008.

The Gouchers also spoke of alleged abuses by Salazar and Rupp of Therapeutic Use Exemptions (TUEs) in 2007 and 2011.

TUEs allow athletes to use a banned substance or method to treat a legitimate medical condition.

The Gouchers said Salazar tried to get a TUE for an intravenous drip for Rupp ahead of races.

Kara Goucher said: "They wanted the IV for whatever reason to make Galen feel better, and they were manipulating the system to get it."

The documentary, fronted by Mark Daly and working in collaboration for the Oregon Project section with David Epstein of the ProPublica site -  also investigates claims about Allan Wells, who won Olympic gold for Britain in the 100m sprint at Moscow 1980.

It heard claims Wells had been using anabolic steroids which were sourced from the British Olympic team doctor, Jimmy Ledingham, with three men having made sworn witness statements implicating the Scot in doping

These claims were strenuously denied by Wells' lawyer.

The lawyer added: "It is not true our client had used any banned performance drugs…at any…time."

A statement by UK Athletics in response to the Panorama documentary read: "UK Athletics welcomes these investigations and would encourage the BBC to share all of the findings with the relevant anti-doping authorities so that they can be fully scrutinized by the appropriate independent bodies, and we too will be reflecting carefully upon the content of the programme.

"UK Athletics operates an absolute zero tolerance policy towards the use of performance enhancing drugs and toward any and all doping practices within sport."

Related stories:
May 2014: Rupp at home in Eugene as runs US 10,000m record in Diamond League
March 2014: Nick Butler: Is a coach responsible for the doping of an athlete?
October 2013: Philip Barker: From long jump pit raker to first Queen's Baton Relay runner, Allan Wells has come a long way