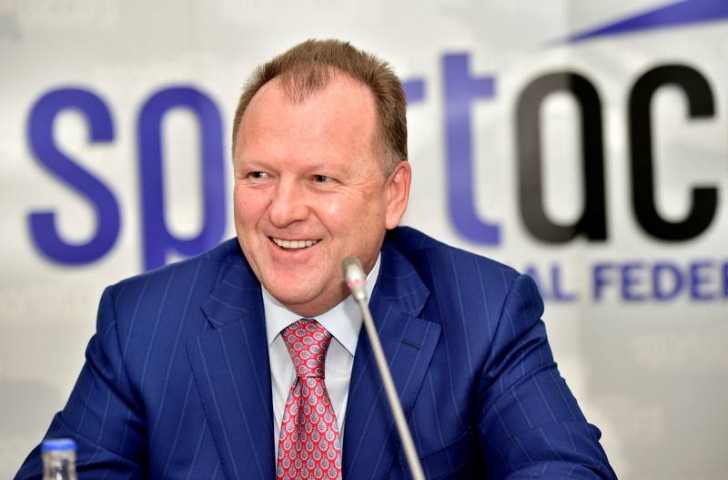 Marius Vizer has resigned as President of SportAccord, it has been announced today.

In an emotional and hard hitting letter this afternoon, the official also announced he will step down from his position on the International Olympic Committee's (IOC) Tokyo 2020 Coordination Commission, vowing to focus upon his work as President of the International Judo Federation.

He thanked all those who "supported me and believed and still believe in me", as well as the values he "proposed and defended", before launching a strong tirade against a sports administration system which, he claims, remains "dictated by nobility titles or family inherited titles, or by members appointed for life".

"In this past month it was proven that in the free world there are, still, higher structures where the supreme value is silence," he claimed.

"Given that this is the answer that I received to my declaration in Sochi and to the proposal of the 20 points agenda, regarding the reforms and benefits requested for the sport and the athletes, I decided to withdraw from SportAccord and the IOC Coordination Committee for the Tokyo 2020 Olympic Games...

"I withdraw with honour and for the honour of sport, its credibility in society, and I hope that one day sport becomes a completely transparent system, a moral code and a model for society," he said.

"Everything I proposed is right and I hope to have opened a door that had been closed for a century, and I hope it remains open forever for the benefit of sport and its values.

"Today, the system working behind the doors is dictated by nobility titles or family inherited titles, or by members appointed for life and I hope that in the future, the basic criteria of the system will be dictated by the achievements in sport, professionalism, performances, fair-play, transparency and the courage to express the truth."

It had been an open secret that relations between Vizer and the IOC had been deteriorating for some months before conflict erupted spectacularly into the open at last month's SportAccord General Assembly in Sochi.

Speaking in front of IOC President Thomas Bach in his opening address Vizer alleged the body "lacked transparency", that its Agenda 2020 reform process had brought "hardly any benefit" to sport and unfairly blocked SportAccord in its drive to organise new Commissions and events.

Every Summer Olympic sport body except for the IJF signed a letter supporting the decision of the Association of Summer Olympic International Sports Federations (ASOIF) to "disassociate" its affiliation with SportAccord, while both the International Paralympic Committee and the Commonwealth Games Federation made a similar move.

After three of the member sports withdrew, Peruvian capital Lima also withdrew as host of the SportAccord-organised World Combat Games, which had been due to take place in 2017.

Vizer admitted in his resignation letter how this latter withdrawal was a particular blow.

"I love sport in all its forms, I believe in the Olympic spirit and its values but I also think that the system can be improved and that in a democratic world every person is free to express his opinions freely," he said.

"I did try to collaborate with the IOC in the two years of my mandate, submitting them numerous proposals for collaboration between the two organisations, but these were always rejected without any plausible explanation."

"My door has always been open for collaboration, theirs was always closed!

"The cancellation of the Combat Games of Lima that was meant to bring substantial benefits to sport and participating athletes, confirms the pressure that was exerted on sports and the organisers of sport events.

"Hoping that the IOC system is neither a dynasty, nor a tyranny or an inquisition, I entrust its destiny in the hands of the young generations, marked by the vision of modernisation of society and all its sectors."

Vizer had shown no indication of backing down despite the mounting criticisms of his action, instead launching his 20-point agenda proposing the introduction of prize money for Olympic athletes, as well as 50 per cent ownership of the Olympic TV Channel by all International Federations, and “complete transparency regarding consultants, wages and contracts”.

ASOIF President Francesco Ricci Bitti rebuked Vizer and urged him not to speak on behalf of the International Federations, while Bach vowed to discuss with his Executive Board next month before responding to Vizer's request to meet with him.

Yet, despite now throwing in the towel, Vizer still defends his actions, claiming that Federations and other stakeholders still support his words even if they have publicly rebuked his actions.

Vizer cited an insidethegames poll asking whether his comments were justified, with over 90 per cent believing they were, as evidence of this wider support.

"I would like to remind my colleagues who decided to suspend their organisations’ SportAccord membership and who chose not listening to the voice of society and continuing the fight for reforms, transparency and fair-play in sport, that in a European city there is a bridge called 'Bridge of Lies' where lovers promise each other eternal love by hanging a padlock on this bridge," he continued.

"I have never hanged and I never will hang a padlock on this bridge for two reasons: one honour, the other - there is no more space for padlocks!

"I only have one question for my self-suspended colleagues: which proposal of the 20 points agenda that I submitted for the reform of sport did you disagree with?

"With the lack of discrimination for the non-Olympic sports, with the transparency regarding the contracts and the salaries of the IOC staff and the consulting companies, with the implication of the Sport Ministries who finance your sport events and your National Federations?"

An IOC spokesperson has told insidethegames this afternoon that the body has been informed of the resignation and will continue "on-going work and consultation with the International Federations and other members of the Olympic Movement".

The topic will be discussed at next week's IOC Executive Board meeting in Lausanne on June 7, it was added.

Related stories
May 2015: Exclusive: FIFA as yet undecided whether to join SportAccord exodus
May 2015: Major blow for Vizer as close allies pull organisations out of SportAccord
May 2015: Lima withdraws as host for 2017 SportAccord World Combat Games
May 2015: Introduction of Olympic prize money among radical proposals made by Vizer ahead of proposed meeting with Bach
April 2015: Vizer attacks Bach over interference, lack of transparency and claims Agenda 2020 brought no benefit to sport