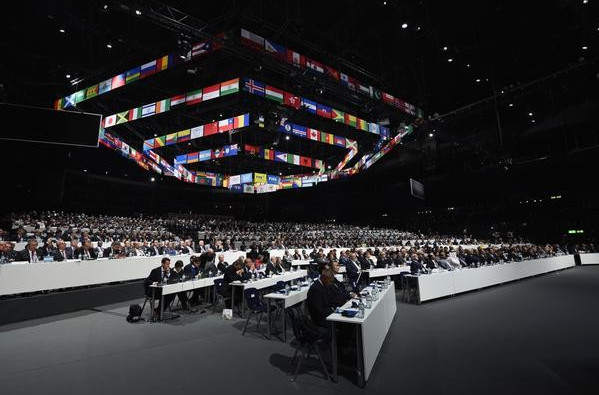 Rumours of a threat started to circulate during the lunch-break of the event, which is being attended by representatives of all 209 FIFA member associations, along with numerous other VIPs.

Immediately after the interval, Jérôme Valcke, FIFA secretary general, took the floor to confirm that “an anonymous threat was made”, leading authorities to search the Hallenstadion premises where the 65th FIFA Congress is being held.

The building was subsequently cleared as safe, enabling proceedings to continue.

The agenda is dominated by two issues, both of which are expected to be dealt with later this afternoon.

The first is a proposal by the Palestinian Football Association for the suspension of its Israeli counterpart.

There have been indications in recent days that this might be resolved with the aid of a five-point Israeli proposal designed to allay Palestinian grievances.

FIFA President Sepp Blatter seemed particularly bullish on this point in his address towards the start of the Congress, urging a “solution that will finally satisfy these two federations, but mainly the Palestinian federation”.

He added: “We will then be able to say, ‘Let the handshake for peace do its work’”.

Jibril Rajoub, Palestine Football Association President, also sounded a conciliatory note, telling insidethegames, “We will keep discussing with everybody until the last moment.

Rajoub added, however: “I think the Israelis have to recognise the realities on the ground and understand that...the suffering of Palestinian footballers by them is a crime.”

The Congress attracted a noisy pro-Palestine demonstration outside the building, with supporters also having to be removed from the conference hall, to Blatter’s visible discomfort, soon after proceedings got under way.

In spite of the dramatic arrests and indictments that electrified the football world earlier this week, the mood appeared to have turned by the time Congress assembled this morning, with noticeably fewer suggestions that Prince Ali might yet spring a surprise.

Blatter himself appeared relatively composed and defiant during his morning address.

He resorted to one of his favourite, rather cheesy, nautical analogies when he concluded by appealing to delegates to “join us to put FIFA back on the right track and where boats will stop rocking and go placidly into port”.

In a notably combative segment, he highlighted the timing of the arrests and indictments of football officials two days before the Congress, saying: “I am not going to use the word ‘coincidence’, but I do have a small questionmark.”

Related stories
May 2015: Platini pleas to determined Blatter to step down as Prince Ali campaign seemingly gains momentum
May 2015: UEFA calls for postponement of FIFA Presidential election
May 2015: United States Department of Justice declare war on FIFA on dramatic day for football
May 2015: FIFA in turmoil following dawn arrests
May 2015: Russia 2018 and Qatar 2022 not affected by FIFA arrests, spokesman claims