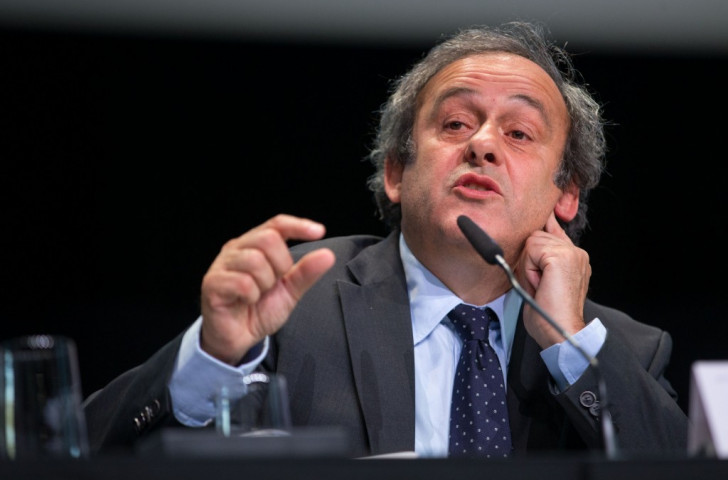 Michel Platini today looked Sepp Blatter in the eye and urged him to resign, amid signs that this week’s dramatic arrests and detailed corruption allegations are helping the campaign of Prince Ali Bin Al-Hussein, Blatter’s only rival for the FIFA Presidency, to gain a certain amount of traction.

An emotional UEFA President explained his plea - made at a meeting involving other confederation Presidents at 11am, shortly after his arrival in Zurich from Warsaw - by saying:

“I have affection for Mr Blatter.

“I think it is a quality of a friend to tell a friend what the true position is.

“He always said he was an uncle to me or something like that.

“If I hadn’t said it to him, nobody would…

As Platini also made clear, the 79-year-old incumbent, who is seeking a fifth term in a post he has occupied since 1998, rejected his advice, saying, “I cannot leave when Congress starts in the morning.”

Nor was there any suggestion that Blatter is ready to walk away in the speech he delivered to the Congress’s Opening ceremony, attended by International Olympic Committee (IOC) President Thomas Bach and other dignitaries, at Theater 11 early on Thursday evening.

In serious, determined tones, the FIFA President acknowledged that “the events of yesterday” had “cast a long shadow over football”, while asserting to his audience: “We cannot allow the reputation of FIFA to be dragged through the mud”.

Blatter said that it fell to him to “find a way forward to fix things.

“There can be no place for corruption of any kind…

“Let this be the turning point.”

But, as Platini was appealing to national associations to support Prince Ali and serving notice that UEFA would meet in Berlin on the occasion of the Champions League final on June 6 to assess the way ahead, with “all options open”, in the event of a Blatter victory, the odds on his defeat were shortening dramatically.

By Thursday afternoon, bookmaker William Hill was quoting the Swiss incumbent at 4/9 to win, against a prohibitive 1/20 two days ago, with Prince Ali at 13/8.

There was more tangible encouragement for Prince Ali when Football Federation Australia chairman Frank Lowy, arriving in Zurich, indicated that Australia would be backing him, saying his manifesto “ provides the basis for a fresh start for FIFA”.

Platini, for his part, estimated support for Prince Ali among the 53 European associations at a minimum of 45 or 46 votes.

If such hopes are realised, it would suggest the Jordanian challenger is at least within range of garnering the one-third of votes necessary to push the contest to a second ballot, which would weaken Blatter, even if he ultimately survived.

In his own remarks at the opening ceremony, the IOC’s Bach underlined that, while this was a “sad and difficult” time for FIFA, these were also “extremely important days”.

Alluding to the IOC’s recently adopted Agenda 2020 reform agenda, which he said had strengthened that body’s zero tolerance policy in the fight against corruption, he warned FIFA that this fight “can be very painful”; however, “there is no other way to ensure credibility”.

Bach urged the football body to strengthen relations with the appropriate authorities to “shed full light” and “take all necessary measures.

“I am confident…that the guardians of football will overcome these challenges,” he said.

In other developments during a day that leaves Zurich rapt with anticipation ahead of the Presidential vote, Russian President Vladimir Putin added his two roubles worth, accusing the US - whose Justice Department sparked the sensational prelude to Friday’s Congress by indicting nine FIFA officials and five other executives for racketeering, conspiracy and corruption - of “yet another blatant attempt to extend its jurisdiction to other states”.

Putin claimed yesterday's arrests were a clear attempt to prevent Blatter’s re-election while indicating that the FIFA President had Russia’s backing.

As a gaggle of Palestine supporters demonstrated in the sunshine outside the Congress venue, England’s David Gill, scheduled to be installed tomorrow as a FIFA vice-president, let it be known that he did not wish to sit on the body’s Executive Committee if Blatter is re-elected.

FIFA’s Ethics Committee announced, meanwhile, that a total of 11 individuals have been provisionally banned from carrying out football-related activities, “on the basis of investigations carried out by the investigatory chamber of the Ethics Committee and the latest facts presented by the US Attorney’s Office”.

Hans-Joachim Eckert, chairman of the Ethics Committee’s adjudicatory chamber, said the charges were “clearly related to football and are of such a serious nature that it was imperative to take swift and immediate action”.

It was later announced that another individual, Aaron Davidson, had also been provisionally banned .from carrying out any football-related activities.

Related stories
May 2015: UEFA calls for postponement of FIFA Presidential election
May 2015: United States Department of Justice declare war on FIFA on dramatic day for football
May 2015:FIFA in turmoil following dawn arrests
May 2015:Russia 2018 and Qatar 2022 not affected by FIFA arrests, spokesman claims
May 2015:FIFA officials arrested in dawn raid in Zurich