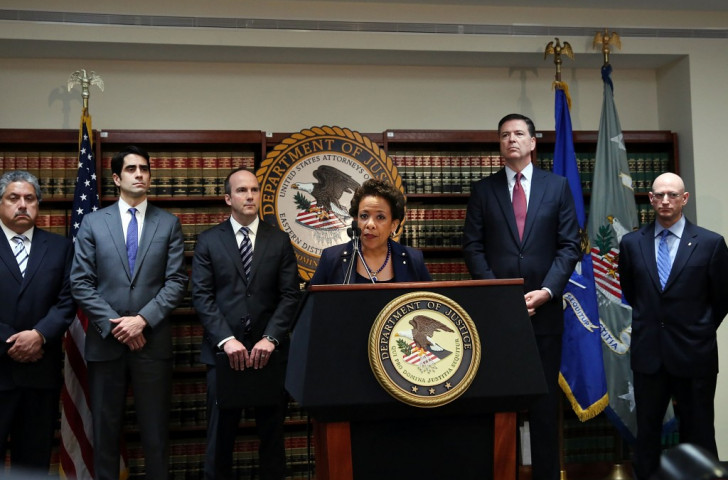 The United States Justice Department on Wednesday declared war on some of the most powerful figures in world football, indicting nine FIFA officials and five other executives for racketeering, conspiracy and corruption.

In a move that will reverberate around the corridors of power of this most global and wealthy of games, and that was exquisitely timed just two days before the FIFA Congress, a bombshell 47-count indictment was unsealed on Wednesday morning in Federal court in Brooklyn, New York City.

This charged the 14 defendants with racketeering, wire fraud and money laundering conspiracies, among other offences, in connection with “the defendants’ participation in a 24-year scheme to enrich themselves through the corruption of international soccer”.

Jeffrey Webb and Jack Warner, current and former Presidents of CONCACAF, the Confederation covering Central and North America and the Caribbean – are among those charged with racketeering and bribery offences.

The guilty pleas of six defendants – including Chuck Blazer, former CONCACAF general secretary and FIFA Executive Committee member, and José Hawilla, owner and founder of the Traffic Group, a sports marketing business headquartered in Brazil, were also unsealed on Wednesday.

In a news conference in New York City, Loretta Lynch, US Attorney General, described CONCACAF as “an organisation in crisis” and said defendants had “corrupted the business of worldwide soccer to serve their interests and to enrich themselves”.

She said: “They did this over and over, year after year, tournament after tournament,” adding:

“The indictment alleges corruption that is rampant, systemic, and deep-rooted both abroad and here in the United States.

“It spans at least two generations of soccer officials who, as alleged, have abused their positions of trust to acquire millions of dollars in bribes and kickbacks.

“And it has profoundly harmed a multitude of victims...

“Today’s action makes clear that this Department of Justice intends to end any such corrupt practices, to root out misconduct, and to bring wrongdoers to justice – and we look forward to continuing to work with other countries in this effort.”

The indictment alleges that, between 1991 and the present, the defendants and their co-conspirators engaged in a variety of criminal activities, “including fraud, bribery and money laundering”.

According to the Department of Justice, “two generations of soccer officials abused their positions of trust for personal gain, frequently through an alliance with unscrupulous sports marketing executives who shut out competitors and kept highly lucrative contracts for themselves through the systematic payment of bribes and kickbacks.

It went on: “All told, the soccer officials are charged with conspiring to solicit and receive well over $150 million in bribes and kickbacks in exchange for their official support of the sports marketing executives who agreed to make the unlawful payments.

“Most of the schemes alleged in the indictment relate to the solicitation and receipt of bribes and kickbacks by soccer officials from sports marketing executives in connection with the commercialization of the media and marketing rights associated with various soccer matches and tournaments, including FIFA World Cup qualifiers in the CONCACAF region, the CONCACAF Gold Cup, the CONCACAF Champions League, the jointly organized CONMEBOL/CONCACAF Copa América Centenario, the CONMEBOL Copa América, the CONMEBOL Copa Libertadores and the Copa do Brasil, which is organized by the Brazilian national soccer federation (CBF).

“Other alleged schemes relate to the payment and receipt of bribes and kickbacks in connection with the sponsorship of CBF by a major U.S. sportswear company, the selection of the host country for the 2010 World Cup and the 2011 FIFA presidential election.”

The Department emphasised that charges in the indictment were “merely allegations, and the defendants are presumed innocent unless and until proven guilty”.

The full list of defendants at the end of an extraordinary day that began with a dramatic dawn raid by Swiss police on a plush lakeside hotel in the genteel Swiss city where FIFA has established its base was as follows:

The following were said to have previously pleaded guilty under seal:

Daryll Warner, son of Jack and a former FIFA development officer, pleaded guilty to a two-count information charging him with wire fraud and the structuring of financial transactions.

Daryan Warner pleaded guilty to a three-count information charging him with wire fraud conspiracy, money laundering conspiracy and the structuring of financial transactions.

Blazer pleaded guilty to a 10-count information charging him with racketeering conspiracy, wire fraud conspiracy, money laundering conspiracy, income tax evasion and failure to file a Report of Foreign Bank and Financial Accounts (FBAR). Blazer forfeited over $1.9 million (£1.2 million/€1.74 million) at the time of his plea and has agreed to pay a second amount to be determined at the time of sentencing.

Hawilla pleaded guilty to a four-count information charging him with racketeering conspiracy, wire fraud conspiracy, money laundering conspiracy and obstruction of justice. Hawilla also agreed to forfeit over $151 million (£98.4 million/€138 million), $25 million (£16 million/23 million) of which was paid at the time of his plea.

Each individual defendant was also said to face mandatory restitution, forfeiture and a fine.

In spite of the unprecedented darkness of the cloud now hanging over it, FIFA insisted both that Friday’s Presidential election pitting incumbent Sepp Blatter against Prince Ali Bin Al-Hussein of Jordan would proceed as planned, and that the 2018 and 2022 World Cups would go ahead as scheduled in Russia and Qatar.

This followed the disclosure that Swiss prosecutors have opened a separate investigation into the bidding process for the 2018 and 2022 tournaments.

One bookmaker, William Hill, was today still quoting Blatter at odds as short as 1/16 to win re-election for a fifth term.

"This is a difficult time for football, the fans and for FIFA as an organisation. We understand the disappointment that many have expressed and I know that the events of today will impact the way in which many people view us," said Blatter.

"As unfortunate as these events are, it should be clear that we welcome the actions and the investigations by the US and Swiss authorities and believe that it will help to reinforce measures that FIFA has already taken to root out any wrongdoing in football.

"While there will be many who are frustrated with the pace of change, I would like to stress the actions that we have taken and will continue to take.

"In fact, today’s action by the Swiss Office of the Attorney General was set in motion when we submitted a dossier to the Swiss last year.

"Let me be clear: such misconduct has no place in football and we will ensure that those who engage in it are put out of the game.

"Following the events of today, the independent Ethics Committee – which is in the midst of its own proceedings regarding the awarding of the 2018 and 2022 FIFA World Cups -- took swift action to provisionally ban those individuals named by the authorities from any football-related activities at the national and international level.

"These actions are on top of similar steps that FIFA has taken over the past year to exclude any members who violate our own Code of Ethics.

"We will continue to work with the relevant authorities and we will work vigorously within FIFA in order to root out any misconduct, to regain your trust and ensure that football worldwide is free from wrongdoing."

Related stories
May 2015: Russia 2018 and Qatar 2022 not affected by FIFA arrests, spokesman claims
May 2015: FIFA in turmoil following dawn arrests
May 2015: FIFA officials arrested in dawn raid in Zurich
May 2015: Platini claims football will "suffer" if Blatter is re-elected as he throws support behind Prince Ali
May 2015: Van Praag and Figo pull out of FIFA Presidential race