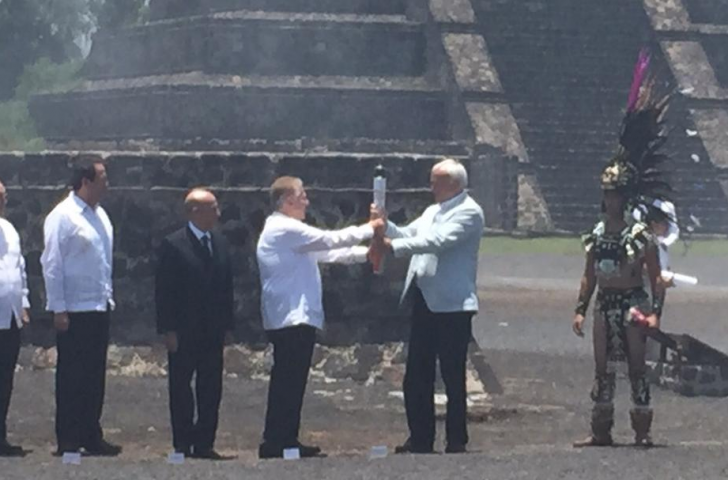 Toronto 2015's Pan American Games Flame has been lit in traditional fashion in an Aztec Ceremony at the Pyramid of the Sun in Teotihuacan, Mexico and is being transported north ahead of its arrival in the Canadian host city on Saturday (May 30).

While the Olympic Flame is traditionally lit at Ancient Olympia, the Pan American version has been lit by Aztec people in ancient temples, first at the Cerro de la Estrella in Mexico City and in more recent years at the 65-metre high Pyramid of the Sun, the third largest pyramid in the world

The only exception was ahead of the Sao Paulo 1963 Games, for which the Torch was lit in Brasilia by the indigenous Guaraní people.

It was handed by International Olympic Committee member Vasquez Raña to Ávila and then Maglione, Petterson and Padilla before Jesus Omar Diaz Pastrán became the first athlete carrier.

Avila claimed athletes who participate in the Games will "strengthen the brotherhood of nations of the Americas, through healthy competition and unity".

He then wished good luck to all athletes set to compete in the event, due to take place from July 10 to 26 and follows the 2011 Pan American Games in Guadalajara.

Maglione, President of the International Swimming Federation, who took over PASO last month following the death earlier in the year of Mario Vasquez Raña, then underlined the seriousness and commitment of the host nation that he sees as key for these Games to be a success.

After next being taken to Mexico City, the Flame will arrive in Toronto on Saturday with a celebratory event planned Canada Square.

This will be followed by a 41-day journey criss-crossing Canada in a 5,000 kilometres on the road and 15,000km in the air, before it returns to Toronto in time to officially open the Games at the Opening Ceremony.