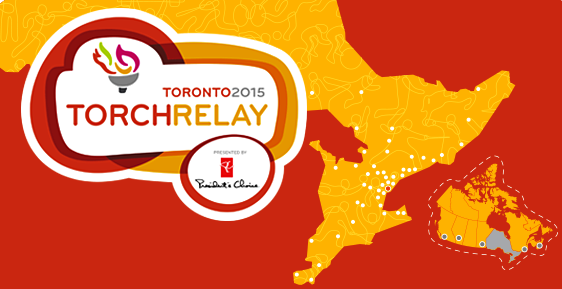 Toronto 2015 have confirmed the Pan Am Games Torch will arrive at Toronto’s waterfront on May 30, before beginning its 41-day journey.

Speaking with exactly 50 days to go until the start of the Games, David Peterson, chair of Toronto 2015, told an audience at the Canadian Club of Toronto of plans to mark the arrival of the Pan Am flame with a series of celebrations to display the city’s excitement and pride in hosting the Games.

“Our great city, region and province has never seen a summer like the one we’re about to have, and the arrival of the Pan Am flame signals that the celebrations and competitions are about to begin,” Peterson said.

“The Pan Am flame speaks to our inherent and universal need to feel hope, optimism, belonging and acceptance, and it recognizes the power of sport in bringing people together and recognizing our common humanity.”

Having been lit at a traditional ceremony at the Pyramid of the Sun in Teotihuacan, hosted by the Mexican Olympic Committee on May 25, a celebratory event in Canada Square will also mark the Torch’s arrival in Ontario’s most populous city on May 30.

Located by Toronto’s waterfront, the event is due to begin at 2:30 p.m and will feature a special performance from the Obeah Opera, while attendees will also be able to hear an exclusive soundtrack produced by local musical director Andrew Craig.

The first of the 3,000 Torchbearers taking part in the relay will then depart from the square, with the torch beginning its nationwide journey by being carried to The Distillery Historical District, where it will be met by another community celebration.

Due to begin at 4pm the celebration will feature performances from Gypsy Kumbia Orchestra, The Chimera Project, Dance Migration and Jasmine Denham, who will be performing the official song of the 2015 Pan Am Games live for the first time.

Toronto 2015 believe the event will provide a taste of the entertainment and cultural activities which will run alongside place during the Games under their PANAMANIA programme.

Canadian astronaut Colonel Chris Hadfield, who became the first Canadian to walk in space in 2001, is an honorary Torchbearer and is due to arrive at the celebration with the Torch at 5pm.

“It’s a great honour to carry the Pan Am flame and to be part of this historic event,” Hadfield, who enjoyed significant fame by creating and posting musical videos while aboard the International Space Station.

“The Torch Relay is a wonderful way to connect Canadians with each other and to build our connections within the Americas and Caribbean.

“When you see our hemisphere from space it just reinforces that while the distances seem vast we share a common future.”

The Torch's journey will include 5,000 kilometres on the road and 15,000km in the air, before it reaches its final destination in Toronto in time to officially open the Games at the Opening Ceremony, set to take place on July 10.

More information about the opening day of the Torch Relay or its route during the 41-day journey can be found be visiting TORONTO2015.org/torch-relay, while fans can also follow the Torch’s progress at @TO2015torch the official twitter account of the Torch Relay.