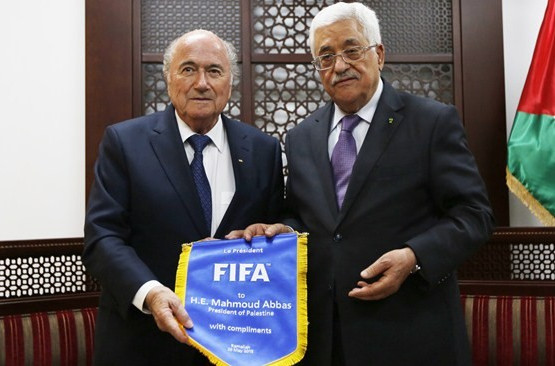 Blatter met with PFA President Jibril Rajoub, Palestinian Authority Chairman Mahmoud Abbas as well as Hamdallah to discuss the problems between the two organisations after the PFA submitted a proposal to have the IFA suspended from world football’s governing body for allegedly imposing restrictions on the movement of their players between the Gaza Strip and the Israeli-occupied West Bank.

It followed discussions held yesterday between the 78-year-old Swiss, widely expected to still be at the helm of FIFA following their Congress in Zurich on May 28 and 29, and Israeli officials, including Prime Minister Benjamin Netanyahu.

“We discussed how we can tackle the issue of the mobility of Palestinian players and football officials,” Blatter said.

“We will work together with the Israeli authorities on concrete solutions that should aim at the creation of a special football ID and a tax exemption on football donations for the benefit of football development in the region.

“We’ll promote a regular exchange between the Israeli and Palestinian authorities through a working group with the participation of FIFA that should meet on a monthly basis.

“As FIFA President, I do not see that a suspension of an association is a solution.”

The meeting constituted the latest round of talks to try and find a resolution to the matter, although if the parties involved cannot agree, the IFA’s proposed suspension will go to a vote during FIFA’s Congress.

The IFA and PFA, along with Blatter and other members of FIFA, held a meeting on May 10 where they all agreed to “pursue dialogue”, but PFA President Rajoub refused to drop his proposal to have the IFA banned.

Despite the Congress being just over a week away, Blatter remains confident a solution can be reached as the two organisations remain at loggerheads.

“I had constructive meetings with the Palestine political and football authorities,” Blatter said.

“We all agree football should unite not divide.

“I came on a mission for peace - football should foster peace and leave politics aside.

“Based on my talks over the last two days, I remain confident, despite the challenging situation, that we should be able to find a solution in the interests of football and all parties involved ahead of the Congress."

Related stories
May 2015: Blatter confident resolution can be reached between feuding Israel and Palestine FA's after Netanyahu meeting
May 2015: Palestine FA chief refuses to drop proposal to get Israel suspended from FIFA
May 2015: FIFA to vote on Israel ban proposal ahead of Presidential elections