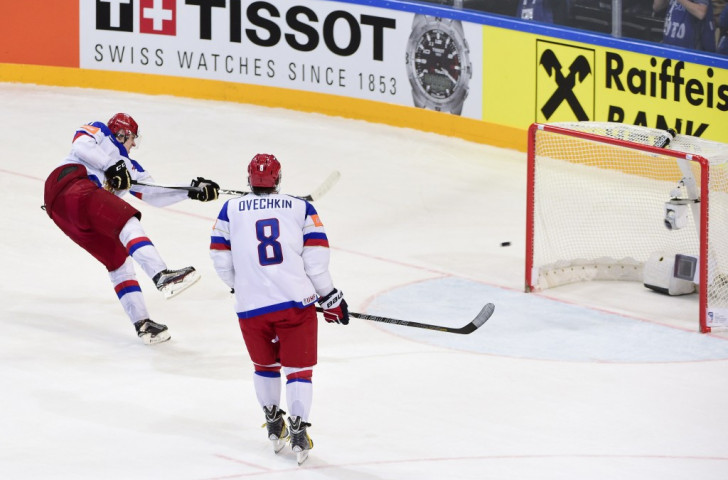 Defending champions Russia booked a final meeting with Canada at the Ice Hockey World Championships as they comfortably beat the United States 4-0 in Prague tonight.

After a tense opening two periods, the Russian side came to life in the third and fired home four unanswered goals to seal their spot in tomorrow's showpiece finale.

Sergei Moyazkin put his side in front early on in the third period with a rasping drive, and shortly after Alexander Ovechkin danced his way through to double Russia’s advantage.

Vadim Shipachyov then effectively killed the game as a contest as he stretched his team’s lead to 3-0, and a breathtaking third period was rounded off by Yevgeni Malkin, who put the gloss on a blistering display by adding a fourth.

The result maintains Russia’s bid to retain a title they have won in four of the past seven years, but they will come up against a Canadian side desperate to dethrone them at the top of world ice hockey.

The Canadians, keen to build on their Olympic gold medal success at Sochi last year, reached the final by virtue of a narrow 2-0 win over hosts the Czech Republic.

Canada, chasing their first World Championships crown since 2007, had been in dominant form throughout the tournament but came up against a determined Czech outfit keen to upset the odds.

In the end, they were unfortunate not to send the match in to overtime.

Canada got off to a good start in the opening period and they broke the deadlock with a well-worked goal, which was eventually capped off by Taylor Hall, who had the easy task of dispatching the puck into the empty net.

The rest of the period continued with a frenetic tempo as both sides fashioned good opportunities to score, before Canada doubled their advantage in the second stanza thanks to a superb individual strike from Jordan Spezza.

The Canadian star is the top scorer at the tournament and he demonstrated exactly why, using a brilliant piece of skill before lashing a low shot into the net.

That prompted Canada to sit back and soak up the Czech pressure and it nearly backfired as the hosts peppered the favourites with attack after attack, but they could not quite find a way back into the contest and they will face the US for the bronze medal tomorrow.