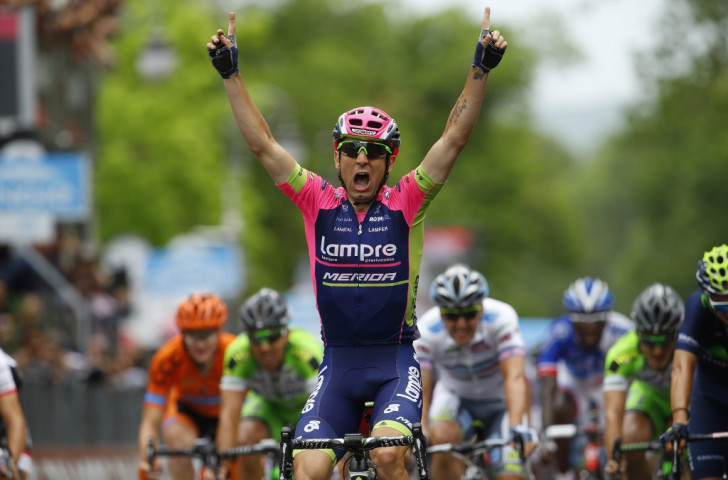 Italy’s Diego Ulissi of the Lampre-Merida team claimed a shock victory in stage seven of the Giro d’Italia, while race favourite Alberto Contador retained the overall lead during the dramatic 267 kilometres leg from Grosseto to Fiuggi.

Ulissi took a surprise win in a thrilling finale as he edged out Movistar’s Spaniard Juan Jose Lobato and Australian Simon Gerrans, who rides for Orica-GreenEdge, to secure the fourth Giro stage win of his career.

The victory capped off the Italian’s return to the sport in style after he received a nine-month ban for elevated levels of Salbutamol, a banned substance that is used to treat asthma.

He won two stages of last year’s race and he admitted he was the underdog today among a stellar field.

“There are some big sprinters here so I knew I wasn’t the number one favourite today,” the 25-year-old said.

“I went early because I was afraid of getting caught from behind.”

Despite a horrific crash during the closing kilometres of stage six that left him with a dislocated shoulder, Contador vowed to soldier through the pain barrier and opted to start the gruelling 267km journey, the longest of this year’s race.

It was a decision he wouldn't have regretted as he demonstrated his battling qualities to ensure he kept hold of the pink jersey.

“It was a hard day for me but I’m happy because I got through it,” the Spaniard said.

“After three and a half or four hours I didn’t know what to do with my arm but I hope and trust that, as the days pass, it will improve.

“Saturday is a stage that I was looking forward to.

“Now it’s going to be hard for me and I expect attacks.”