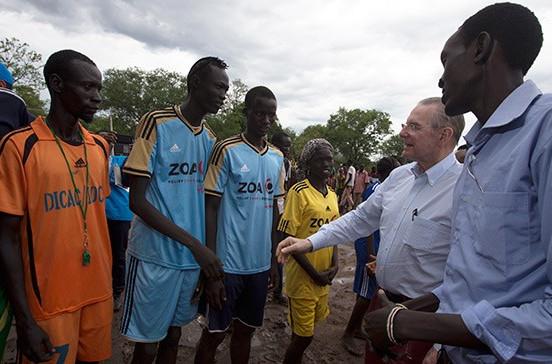 Rogge, honorary IOC President and now UN secretary-general Ban Ki-moon's Special Envoy for Youth Refugees and Sport, pledged to help those who had sought refuge in the area after violence broke out between Government and rebel forces in their homeland in 2013.

Some 200,000 people are currently in Gambella - half of which are under the age of 17 - and Rogge, who was making his second trip in his current role after a visit to the Azrag Refugee Camp in Jordan last year, says he will help get more of them playing sport in the future.

“Sport is a great peace factor,” said the 73-year-old Belgian.

“I believe that when teams face each other in refugee camps they learn to foster respect, reconciliation and friendship.

“My wish for the refugee youth is to practise more sport and we are going to take the measures that are needed for that.”

Accompanied by Ethiopian IOC member Dagmawit Girmay Berhane, Rogge visited various families and children in the western region, discussing the benefits of sport in helping to protect and develop the lives of the young population.

He also went on to divulge the way sport can be crucial in both education and health, as well as its ability to integrate everyone into society as the IOC looks to invest in sports facilities and programmes in the area.

Rogge talked with other UN High Commissioner for Refugees (UNHCR) staff and attended various sporting events going on in the Gambella part of Ethiopia such as football, volleyball and athletics for both boys and girls.

The refugees who came out to meet with Rogge also asked for equipment, including kits and footballs, as well as for an increase in the sporting facilities in the region.

“We need to protect refugees by promoting sport, which is an integral part of child development, helps them make friends and succeed at school, brings youth together to live in peace and to be more active within the community,” Angele Djohossou, head of UNHCR's Gambella office, added.

As well as further example of the drive of the IOC to use sport for wider socio-political aims under Rogge's Presidential successor Thomas Bach, it also comes as South Sudan, which split from Sudan in 2011, strives to become a member of the IOC.

IOC Director of NOC Relations Pere Miró told insidethegames last month that he was "hopeful" this process could be completed this year, meaning athletes would be able to compete under the South Sudanese flag at the Rio 2016 Olympic Games.

Ethiopia, meanwhile, will be looking to improve upon 24th place on the medals table at London 2012, where they won three golds in a seven medal haul.